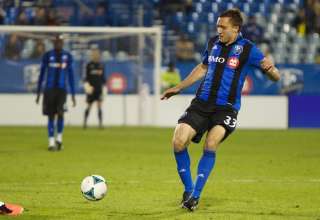 The Montreal Impact’s CONCACAF Champions League hopes came to an end at Saputo Stadium Tuesday evening. Despite the fact that Marco Schallibaum’s men won the match, defeating the visiting CD Heredia side by a 2-0 score, the group portion of the competition will be decided when the Guatemalan side meets San Jose at Buck Shaw Stadium on Oct. 23.

Dominating every facet of the game, Montreal was superior both technically and tactically but the gritty, physical Heredia squad never gave up, its energy and determination providing the 13,703 fans, several hundred of whom were supporting the visiting XI, with one of the more entertaining games to which Montrealers have been treated so far this season.

“We took it seriously this evening,” said Impact gaffer Schallibaum. “They played aggressively with a lot of will. With a little luck we could have scored five or six. We fought through to the end.

“We had players playing for pride too. I’m very happy with my team,” he continued. “They played a very good match with a lot of character.”

The home side got on the score sheet early in the opening half. Four minutes in, Daniele Paponi scored, his goal coming after a flurry of passes between he, Felipe and Andrea Pisanu, the successful play being put in motion by a corner kick.

Playing with tempo, the teams challenged each other as play went end to end in the first quarter hour before settling into a pattern that saw Montreal attack repeatedly but unable to finish and the Guatemalan side play a rugged physical style that drew more of a reaction from the crowd than from referee, Courtney Campbell.

Andrew Wenger put one ball wide in the 13th minute. In behind the defence, he had trouble controlling a bouncing ball and ended up missing the mark. Two minutes later Hassoun Camara, the only regular on the Impact back line, put one over the net defended by Jose Calderon.

Heredia’s first shot on goal came in the 19th minute but was easily gathered up by keeper Evan Bush, who wore the captain’s armband.

In the 26th Bush got help from Collen Warner and Wandrille Lefevre, both of whom laid out horizontally in front of the net allowing Bush to get to the ball before any of the oncoming Heredia players did.

Wenger had a second opportunity in the closing minutes of the first half but, in alone in the 40th, was unable to pull the trigger and the Impact went into the interval with a one-goal lead.

The Pennsylvania native finally managed to put one into the mesh behind Calderon in the 54th, sprung by a terrific through ball by Maxim Tissot ,ending a scoring drought that extended back in time to the month of May.

“Finally I just stopped thinking about it and just let my instincts take over and I scored. Hopefully I’ll be able to make that happen a little bit more often. It feels good,” he said after the match.

“I’m happy we put in a good effort tonight but we just looking to build on that I guess.

“We came out there and attacked. It was a very open game and we showed some quality. Unfortunately we weren’t too decisive in some moments but we put on a good show.

“They came out and played their style of play. We just sort of locked horns and we came out on top.”

Tonight’s officiating crew was from Jamaica and referee Campbell had his performance rated less than positively by the crowd. He called back what could have been the Impact’s third goal and, perhaps more annoying, seemed to miss all manner of Heredia fouls, most notably awarding Paponi a yellow card for simulation after he was the recipient of a two-legged tackle that felled him just outside the penalty area.

A lot gentler than he has been in recent post-game pressers, Schallibaum, perhaps learning from his previous experiences, was satisfied with a somewhat more diplomatic statement than usual. “The referees are not our best friends these days. I think you saw certain things that did not help us.”

If the goal posts were a few inches further apart, Montreal might still be in the running to advance to the next round. Marco Di Vaio, who came in at the 60-minute mark, rattled a shot off the post in the 70th while Justin Mapp did the same thing seven minutes later.

Schallibaum started three young local players on his back line and the youngsters all played strong, smart games without any major blunders along the way.

“I thought they were phenomenal tonight. They get thrown into the fire sometimes and they’ve been fantastic throughout this whole tournament. Karl (Ouimette) had one of the better games I’ve seen him play. I was very impressed with his efforts tonight and Tissot, same thing. Those three guys in particular, I think played very well,” opined Bush.

Speaking through a translator, Heredia head coach Juan Carlos Elias shared his impressions with the media after the match.

“It’s great to be here in Montreal. Everyone has been very kind to us. The people have been very supportive. We’re a very small club from Guatemala playing against the Montreal Impact with all the big stadium, big organization, It’s huge for us to be there,” he said.

“Impact was a very fast team,” he continued. “So we had to adjust our strategy. Our tactics were as good as theirs. They were just faster on the ball. We’re a small club. It’s just amazing for us to be here tonight.”

The Impact next takes to the pitch in Chicago against the Fire on Saturday. The team has never come away from the Windy City with a result.