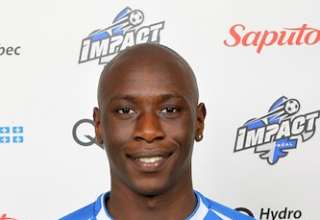 The Impact team that took to the field to undertake the second half of the season against the Fort Lauderdale Strikers bore very little resemblance to the line-up that started on opening day with only five men in the same positions they occupied on April 9.

In an effort to turn things around six new faces have arrived in the past week with five presently on tryout with the team and forward Marco Terminesi, who appeared in seven games last summer with the Impact, signing for the balance of the season. He becomes the second player, after Eduardo Sebrango, to rejoin the team this year.

With his team mired in seventh place, only two points ahead of the cellar-dwelling Atlanta Silverbacks and seven behind tonight’s visitors, who occupy the sixth and final postseason slot, Impact coach Nick De Santis seems to have taken a page from the Toe Blake coaching manual, upping the intensity of practice sessions with the rationale that “You play like you practice.”

Playing with more energy than they have in recent memory in a game that saw several shoulder-to-shoulder collisions in the early going that would not be out of place at the Bell Centre, the Impact dominated in the first half, both physically and tactically, spending far more time in the Fort Lauderdale end than in its own territory.

Mignane Diouf’s third-minute chance set the tone for the first half. Six minutes later Anthony Le Gall deflected an Antonio Ribeiro free kick just wide of the Strikers’ net and in the 15th Diouf got a second chance.

Although they were outplayed in the early part of the opening half, and had to settle for counterattacking, the Strikers had what proved to be their first chance in the 17th minute as the only forward they dressed, Abe Thompson, shot the ball to the left of the Montreal net. Impact keeper Evan Bush made two saves in the opening half, both times stoning midfielder Brian Shriver.

Strikers’ goalkeeper Matt Glaeser made his third and final stop of the opening half in the 43rd minute, preventing a Sebrango header from finding its intended target.

Maintaining the pressure as the second half got underway, the Impact finally broke the ice in the 53rd minute. A corner kick found its way to captain Nevio Pizzolitto, He managed to get the ball to Hassoun Camara, who potted his first as a member for the Impact, breaking the month-long team scoring famine and registering the first goal in a game between the teams this season. The Montreal midfielder was mobbed by his teammates who piled on in a manner not unlike the way hockey teams bury their goaltenders after a championship win.

They would not hold the lead for long. Less than two minutes later, Fort Lauderdale replied in kind, with defender Lance Laing beating Bush as Adam West was credited with the assist. Two minutes later another Laing shot found the crossbar and momentum shifted to favour the Strikers, who threatened several times as the clock ticked off the final minutes of play.

A four-on-two break for the Strikers in the 68th minute of play was ended by Bush, who made a fingertip save, the third time he thwarted Shriver on the evening. The final chance came in the 87th minute as Bush once again saved the day with a diving stop on midfielder Paulo Le Petit to salvage a tie for his side.

Sebrango, playing his first complete game since returning to the pitch, recognized that the team let up in the second half stating, “We knew that if we got a goal we had to keep going the same way. We should have been more aggressive in the final 10 minutes.”

He also credited Bush with a good night’s work, characterizing him as “A good goaltender who is working hard and keeping us in the game.”

Camara expressed relief at his goal but, like Sebrango, decried the lack of concentration that followed before ending on an optimistic note.

“We’ve had trouble scoring, especially at home. We had opportunities to win tonight but and unfortunately we paid for our lapse in concentration. Every team has its ups and downs and I don’t think they were that much better than we were tonight. It’s up to us to buckle down and turn things around. We have a nice stadium, great fans, everything we need to make it into the playoffs.”

“They did a lot of damage on our right side tonight,” said Impact coach Nick De Santis, who questioned his team’s fitness level in his post-game comments. “We were solid on the left with Simon (Gatti) and Luke (Kremalmeyer) but we were weak on the other side with Le Gall and Billy. We have three days to regroup and move forward so we have to be positive and understanding with the guys but they have to be aware of the errors they made.

“After you score a goal, the first thing on your mind is ‘Great, we scored. Let’s try to not let them score. But we backed off and that’s a sign of fragility. Our right side had a difficult time with Laing but I think they just should just done a better job. Again it’s a shame because they put in a lot of effort to get that goal. You don’t get many good moments in a game but when you do there has to be quality.”

The Impact’s next game is on Sunday against the Atlanta Silverbacks.

THROW-INS – Forward Mircea Ilcu and midfielder Wandrille Lefevre, both of whom started the season with the Impact’s U21 side, have been informed that they will remain with the big club for the balance of the season. Both saw action this evening.

•Hassoun Camara’s goal put an end to a scoring drought that, had it extended another 30 seconds, would have broken the two-year-old team record for futility which still stands at 468 minutes

•Impact forward Reda Agourram will be out of action for the next four to six weeks with a groin injury, joining goalkeeper Bill Gaudette on the sidelines.

•Fort Lauderdale has signed Colombian midfielder Walter Restrepo Uribe to a contract for the balance of the season. He will suit up once US Soccer Federation approval and international clearances come through.