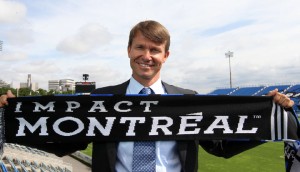 It has its primary sponsor. It has its new logo. And now the Montreal Impact has its man.

He is Jesse Marsch.

The former MLS midfielder, most recently an assistant coach with the U.S. Men’s National Team, was introduced Wednesday morning as the Impact’s first head coach as a Major League Soccer franchise.

It will be his first stint as the leader on the sidelines. But with a resume that includes a 14-year playing career, three MLS Cups, four U.S. Open Cups and a number of tenures as an assistant coach, he fit right into what the team was looking for.

“He’s a proven winner. He’s one of the most decorated players in MLS,” Impact president Joey Saputo said. “He has a game plan he wants to build and he’s not going to take shortcuts in doing it. It’s the type of person that we want.

“We’re an expansion franchise and it’s important for us to make sure that we start on the right foot.”

Marsch is no stranger to being a part of an expansion club. In 1998, he joined the Chicago Fire franchise in its inaugural campaign, one that saw the team go on to win the MLS Cup. But while it ended in the best possible manner, it wasn’t all sunshine and roses. He plans on bringing that experience to his new troops.

“That was my hardest season I ever played in. We had so much to learn about each other, about what was expected, so setting expectations is important in the right way,” he noted. “It’s an up and down process so I think we need to be prepared for what it’s going to look like, what it’s going to be like and to be mentally strong so that throughout a 10-month season, we’re ready come every night to play.”

Like his team, Marsch will also be entering new territory as a head coach. And although it will be the first time he calls the shots, it’s a day he’s been dreaming about since he first stepped onto an MLS field as a player.

“I almost considered the later half of my career like a research project,” he said. “I studied the game, I talked to a lot of good coaches, I took trips to Europe to meet with different clubs and see different clubs and the way that they did things, so I’ve had my mind wrapped around this for a long time.”

Like he did as a player, Marsch has paid close attention to other coaches with the goal of learning from them and improving his coaching abilities.

“You take a little bit of their personalities, you watch the way they train teams, their presence on the field, you watch what kind of players they get and you try to piece it together and then use it in the ways that you think about the game to help make you better,” he explained.
He’ll get to work on his new team right away but won’t be on the field just yet. Sporting Director Nick De Santis will maintain his interim coaching duties through the remainder of the current season. Marsch, meanwhile, will evaluate his personnel — both players and coaches — from up above.

“As much as I would really like to get down and start working with the players a little bit, I think it’s important for them to continue what they’ve been doing but to have me observe so that I can make educated decisions on exactly where the players are and where the team is going forward,” Marsch said.

And for the Impact, the hope is its MLS debut turns out better than its NASL finale. The club is nine points out of a playoff spot going into tonight’s match.