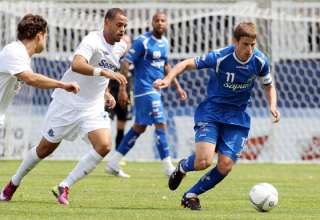 Both Montreal and FC Edmonton came into today’s match at Saputo stadium hoping for a positive outcome. But only the Impact and the large majority of the 11,232 spectators who turned out on the most clement day for soccer Montreal has seen so far this spring,were happy after 90 minutes.

The Impact had not won since the last times the teams met — a 5-0 shutout for the visiting Impact in the Alberta capital — while FC Edmonton had not lost since the May 1 game, posting a 3-0-1 record that had the first-year side in second spot in the NASL standings. The Impact’s season can start being referred to as disappointing with the team in second-last spot in the standings, ahead of only the Atlanta Silverbacks.

The opening half gave every sign of being as one-sided as the last encounter between the clubs. The Impact, with striker Ali Gerba off with the Canadian team, played a 4-3-3 set-up with Reda Agourram, Leonardo Di Lorenzo and Mignane Diouf playing forward and gave Edmonton keeper Rein Baart all he could handle, challenging him early and often.

A second-minute Hassoun Camara free kick from just outside the 18-yard box went just wide of the Edmonton goal. The seventh minute saw Di Lorenzo send a shot over the visiting net seconds later. Baart managed to counter Diouf’s point-blank blast and then keep his team even by dropping on a ball just outside his right post.

Montreal, without Captain Nevio Pizzolitto due to hip injury, lost Richard Pelletier in the 28th minute to what looked to be an injured hamstring. Pelletier was seeing his first NASL action of the present campaign, having just returned from the suspension arising from the last Impact game if the 2010 season. Coach Marc dos Santos brought Zurab Tsiskaridze into the game to replace the fallen defender. A definite medical diagnosis is expected tomorrow.

Diouf, the most recent addition to the team, put Montreal ahead in the 34th minute, taking a Di Lorenzo pass and breaking up the right side before burying the ball in the mesh behind Baart, his first of the present campaign.

The second half followed the pattern set in the first, with Montreal commanding the play, controlling the ball and outchancing the visitors, although Edmonton defender Paul Hamilton came close to evening the mark, heading a free kick over the crossbar in the 63rd minute of play.

Moments later he made the defensive play that nullified Pierre Rudolph Mayard’s attempt.

Baart, thrown out of the last game between the teams, was sent off in the 79th minute after touching the ball outside his designated area while attempting to counter a Mayard run and was replaced by Lance Parker. The Impact scored their second goal of the afternoon in the when Phillipe Billy put his first goal of the season behind the new Edmonton keeper off a scramble after the ensuing free kick. Di Lorenzo earned his second assist of the game.

“It’s not important whether I score or someone else does,” said Billy. “The important thing is that the team wins. I had an opportunity. It’s something I do quite often —try to sneak in unnoticed and alone on the weak side — and today it paid off.

Impact keeper Bill Gaudette dedicated his league-leading fourth clean sheet of the season to his teammates.

“I have to give all the credit to the guys in front of me. They do all the hard work, I just stand back here and yell at them.”

Coach Marc Dos Santos, appearing more relaxed than he has in the recent past when meeting the media, had thoughts for the team’s support staff, saying.“I’d like to dedicate this first home win and the three points to all the Impact office staff, from the ticket office to the marketing people, all of them. They deserve a win as much as anyone else does.

Montreal’s next match is on Wednesday, a road game in Atlanta against the last-place Silverbacks.

Throw-Ins
• Impact striker Ali Gerba, Canada’s top scorer in CONCACAF Gold Cup competition with six goals to his credit, is expected to be in the squad in Detroit on Tuesday for the national team’s tournament opener against the U.S.

• The Montreal Impact Academy, 2-2-1 in First Division play, are tied for third place in CSL standings, two points behind league-leading St. Catharines Roma. Goaltender Maxime Crépeau and midfielder Marco Lapenna were named to the Canadian side for the FIFA U-17 World Cup.