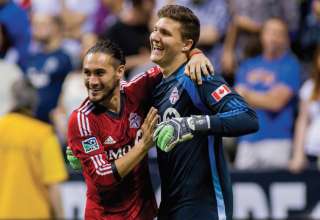 Issey Nakajima-Farran’s soccer career has taken him around the world. England. Japan. Australia. In 2014, he made the decision to come back to Canada — and to make Toronto his home. But, less than two months after he signed with the Reds, he was traded to Montreal — and he’s wondering if coming to MLS was the right choice, after all…

For all of the globe-trotting that Issey Nakajima-Farran had done over his 20-year career, one common thread linked his transfers from club to club and from country to country — he was the one choosing to make those moves. The presumption that similar player freedoms existed in Major League Soccer was what left the Calgary native shocked when he unexpectedly found himself on the move once again.

On May 16, Nakajima-Farran found himself traded (along with some allocation money) from Toronto FC to the Montreal Impact in exchange for Collen Warner. Less than two months after officially signing with TFC and on his 30th birthday, no less, Nakajima-Farran was shocked to find himself wearing the bleu, blanc et noir.

“As a player it’s always your decision, whether you wanted to be traded, loaned out or signing a new contract,” Nakajima-Farran says. “I’ve made all my decisions by myself or in a 50-50 way [with a club], so to have a decision made on my behalf with me having absolutely no say was obviously tough.”

He was even more vocal via social media on the day of the trade, using the hashtags “#mlssoccer” and “#inhumane” to punctuate a tweet that read “Birthday surprise!! Wow! Just like that. It’s not right. Surreal.”

The problem was, as Nakajima-Farran admits, he was so used to trades being mutual understandings between player and club that he wasn’t even aware that out-of-the-blue moves were possible in his new league.

“I’d never realized [that], actually, when I signed up,” Nakajima-Farran says. “If I knew all the rules, I think I would’ve been more skeptical about coming to the league had I known I had no power over my judgment or my options. As a player or as an agent, everybody needs to do their homework and realize what they’re signing up for, so I guess that was my mistake.”

Such a statement seems to hint that Nakajima-Farran may be thinking about eventually moving on from MLS though, at the very least, he’s still going to another major city within his home country. Two weeks before being traded, he spoke to me about how comfortable he was playing in Canada.

“I’ve always been envious of, wherever I went, the local guys. They always had their friends and family [present],” Nakajima-Farran said before the trade was made. “While I don’t quite have all my friends and family here, I do have quite a few friends in Toronto and they make me feel like this is my home… [My teammates] keep putting in my head ‘this is your home, this is your home.’ I’ve never found it too difficult adapting to other countries, but it’s always nice when you have familiar surroundings.”

Nakajima-Farran has certainly had plenty of experience at adapting over his career as, like many veteran footballers, his résumé reads more like an atlas than a list of teams. After playing for youth teams in Japan and in England (with Crystal Palace), Nakajima-Farran’s professional career has taken him from Japan to Singapore to Denmark (with three teams over six years) to Australia to Cyprus and, finally, to Canada.

What made the trade particularly surprising for both Nakajima-Farran and TFC supporters was that, by all appearances, the winger was fitting nicely into the Reds’ midfield mix. He scored twice in five league games (one of them a start) for TFC and started both legs of Toronto’s Canadian Championship semifinal with the Vancouver Whitecaps. When the tie came down to penalty kicks, it was Nakajima- Farran’s goal that ended up being the clincher that allowed TFC to advance.

That huge conversion ended up being Nakajima-Farran’s swan song in the Reds jersey. As fate would have it, TFC advanced to meet the Impact for the Voyageurs Cup, with Nakajima-Farran forced to watch Montreal win from the sidelines since he was cup-tied.

With the Impact struggling near the bottom of the MLS standings, it opens the door for Nakajima-Farran to win more playing time on a team that could be in line for a major rebuild unless things soon turn around. Becoming a regular in Montreal will also only help Nakajima-Farran’s case for future national-team duty, possibly in Canada’s scheduled friendlies against Jamaica and Panama later in 2014.

For all of Nakajima-Farran’s stops around the world, the one constant in his career has been the national team, earning 30 caps for Canada since 2006. (His brother, Paris, is also a veteran of Canada’s U-20 team.) He has received 30 caps since 2006, experiencing both the few highs and the many lows of Canada’s form in recent years, including the disappointments in World Cup qualifying to the ongoing misery of the team’s 16-game winless streak.

The last seven of those 16 winless games have come under Benito Floro’s leadership and, while Canada has yet to record a victory for its head coach, Nakajima-Farran has confidence that the program is turning around.

“Everything takes time. Just because a new coach or a few new players come, it’s not going to have any drastic change,” Nakajima-Farran says. “You can’t switch a button, you have to work on things. Maybe it’ll take five or 10 games for everyone to hit their stride, and that goes even for the coaches and the staff.

“Benito is still trying to get his rhythm and what he wants from his staff and players. He’s very clear in what he wants and I really like that about him. He’s like a father figure, somebody that you can trust and kind of look up to… I really respect that and I think it’s good for Canada, though only time will tell.”

Canada’s January and May training camps were mostly populated by younger players who represented the future of the national team. Yet, since Nakajima-Farran has been capped three times in Floro’s seven games, the winger is still very much part of the picture for international call-ups.

For now, however, Nakajima-Farran is focused on the Impact. While the circumstances behind his arrival in Montreal weren’t ideal for him, the winger says he has received a warm reception in his (latest) new city.

“All the guys are decent guys making me feel welcome and the whole club is very welcoming, as are the fans,” Nakajima-Farran says. “So it’s very nice to feel wanted rather than not.”