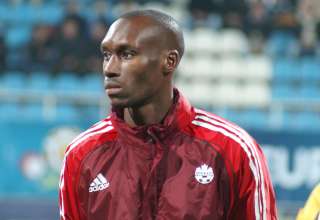 Midfielder Atiba Hutchinson has won the Canadian Soccer Association’s male player of the year award for the first time.

It might not be the last for Hutchinson, who went to high school in Brampton, Ont.’s Heart Lake neighbourhood. This season, Hutchinson left Copenhagen of the Danish League — but not before leading the club to a 2010 title and being named the league’s player of the year — for PSV Eindhoven of the Dutch Eredivisie.

Hutchinson said walking onto the pitch at the Amsterdam ArenA, when PSV traveled to face Ajax, the hated rival, was a “dream come true.”

“Holland is a very technical league; everyone plays a passing game, not much long-ball,” said Hutchinson during a Friday conference call.

And he reflected on the fact that he had to rise through the ranks in Scandinavia before getting the chance to play for one of Europe’s most storied teams.

“I started off as a 20-year-old in Sweden, with a smaller club. I climbed the ladder, worked my way up… I’ve been climbing the ladder and developing as a player.”

Hutchinson also believes that the men’s national team is gelling under coach Stephen Hart, and he’s hoping for big things at the Gold Cup in 2011. The championship game of that tourney is set for the Rose Bowl in Pasadena, Calif.

“Stephen Hart is a good coach,” said Hutchinson. “A lot of us believe and trust in him.”

Hutchinson has also noticed just how much of the national-team program is stocked by players from Brampton. It’s a topic of discussion in Canadian camps with fellow Bramptonians like Paul Stalteri and Iain Hume. They have been amazed by how the U-20 team has been overrun by Brampton-based prospects.

“I don’t know why so many players are coming out of Brampton,” he said. “Maybe it is coincidence. Me and Iain grew up playing against each other… Many of us talk about the young players who have signed for TFC or who are going to Europe who are from Brampton.”