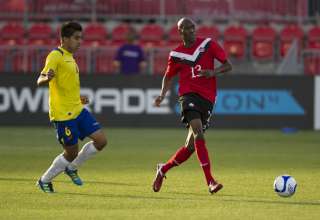 Atiba Hutchinson has been named the Canadian Soccer Association’s male player of the year, beating out Olivier Occean for the award.

Hutchinson recovered from knee surgery and made 43 appearances for his Dutch club, PSV Eindhoven, in 2012. He has two goals and three assists in 16 league matches so far this season. Hutchinson has also been a regular in the Canadian men’s national-team lineup, and has often rushed back from injury in order to play for Canada.

And he said he wants to be part of Canada’s qualifying campaign for the 2018 World Cup. Hutchinson will be 30 in 2013.

“It still means everything to me, to be part of the (national) team and to have another go at it,” Hutchinson said on a conference call with Canadian media.

In his mind, he’s at a “pretty young age, but not a very young age.” And he doesn’t see his role with the national team changing in the coming years, even though he’ll become an elder statesman on what will be a young squad.

“I’m not so much of a vocal player on the pitch,” he said. “I work very hard and have other players vibe off of that.”

Hutchinson’s contract with PSV expires in 2013. He said he’s focused on keeping his European career going, and that playing in England would be a “dream.” While the idea of playing for one of the Canadian MLS teams might appeal to him, that wouldn’t come for at least two or three years down the road — even if one of those clubs offered him a Designated Player deal.

With Doneil Henry winning the U-20 award earlier this week, Hutchinson’s win gives Brampton, Ont. wins in that category and the male player of the year. Hutchinson hails from Brampton’s Heart Lake neighbourhood.

Hutchinson beat out Occean, who you could argue had gone into the vote as a prohibitive favourite. Occean led the Bundesliga-2 in scoring in 2011-12. He scored 17 times for SpVgg Greuther Furth, and led a team to the second-division title and, of course, promotion. His performance earned him a transfer to Eintracht Frankfurt.

Occean also scored in a World Cup qualifier in Cuba. But he was sent off in October’s 3-0 home win over Cuba, which meant he wasn’t available for the 8-1 loss to Honduras which ruined Canada’s World Cup qualifying campaign.