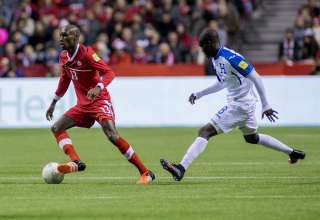 Atiba Hutchinson is anchoring the midfield for Besiktas, currently in first place in the Turkey’s top division. Before that, he spent years as the linchpin for PSV Eindhoven.

Hutchinson, who was announced as Canada’s male soccer player of the year Friday, understands that he’s kind of gone where no Canadian has gone before. And, looking at rosters across Europe, we don’t see another Canadian having that kind of impact at a top-flight club.

Hutchinson said Friday that it will take Canada’s men’s team to put together a string of solid international results to convince managers and coaches to give this country’s players shots at making rosters.

“Nobody looks at Canada as a footballing country,” said Hutchinson, named Canada’s player of the year for the fourth time in his career. “But the only way to get recognized is to get results and go far [as a national team].”

Canada has two major statement games coming up in March, a pair of World Cup qualifiers — home and away — with Mexico. After Canada came through with four points in their last two qualifiers against Honduras and El Salvador, Hutchinson said he’s actually sorry that he has to wait months before putting on a Canadian jersey again.

“I think about it [the games against Mexico] so much. I actually don’t want it to be so far away.” He added that there was such a good feeling in Canada’s camp over the previous pair of qualifiers, Hutchinson didn’t want to break that momentum.

“It does make it special,” said Hutchinson. “I thought he had an amazing season. I personally think he had a very good shot at winning it.”