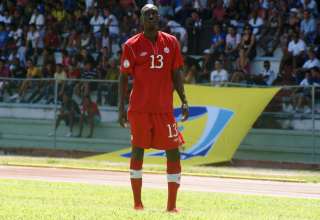 When Atiba Hutchinson made the move to Turkey this summer, he knew exactly what he was getting into.

His new club, Besiktas, had been kicked out of the UEFA Europa Cup in the fallout of a match-fixing scandal that took place before Hutchinson ever joined the team.

Besiktas was allowed to play pending its appeal to the Court of Arbitration in Sport and, while the team knocked off Tromso of Norway to advance, the CAS ruled against Besiktas late last month and it was subsequently kicked out of the competition again.

Training with the Canadian team in advance of Sunday’s friendly against Mauritania, Hutchinson said he knew the situation going in.

“We knew about it. It’s a little bit difficult but you just have to be focused on what you do on the pitch and let everything off the field take place,” said Hutchinson as the Canadian national gathered in Spain ahead of two friendlies with Mauritania. “We couldn’t really do anything about it but just remain focused on what we had to do. In the end we didn’t get the chance to play in the Europa (League) but hopefully we’ll be able to get back there.”

Hutchinson was with PSV Eindhoven for the past three seasons but it was known well in advance of the end of last season that Hutchinson wouldn’t be coming back. He skipped the Gold Cup so that he could sort out where he’d be going for the current season and after rumours that he was joining dragged over a number of weeks, he eventually joined Besiktas.

And, while the issues with Turkey are many given the recent issues with match fixing and the reputation for the league when it comes to being delinquent on paying players, Hutchinson was moving for stability over anything else.

“I thought if I was going to Turkey I’d prefer going to one of the bigger teams and it just took a little bit of time,” said Hutchinson. “But in the end I was happy to make that decision and go to one of the better teams in Turkey.”

His choice is paying off so far, as Besiktas has started off the Super Lig season in fine form picking up full points all three league games so far. Hutchinson missed the first game as he was still getting settled in the new country, but he’s played every minute in every game since.

In Turkey, it’s a whole new environment for the player widely regarded as the most skilful Canadian currently playing.

“I’m used to playing in Denmark, Sweden, and Holland but it’s been good so far,” he admitted. “I’ve been there about three or four weeks and I’m just getting settled in and the team’s been doing well so far. I’m just getting my feet set and it’s been a good start so far.”

Since Hutchinson wanted to join one of the top Turkish teams, at least he didn’t join Fenerbahce who was issued a three-year ban for its involvement in the scandal.

If the good play continues for Besiktas, it could see a return to the Europa League or even the Champions League for next season. With Hutchinson in the lineup, PSV clinched a spot in the qualifiers for this season but the current iteration of that team couldn’t finish the job as it was knocked out in the final qualifier.

But Hutchinson was quick to quash any notion that he joined a team without doing all his due diligence and didn’t research the situation.

“I was hoping that it wouldn’t happen that we wouldn’t get the ban but it’s unfortunate to get banned for the year. But my focus was just on joining one of the top three teams in Turkey and that’s all I was really thinking about.”