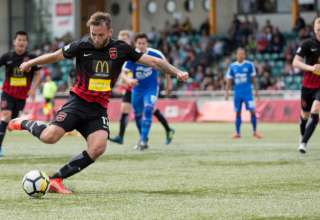 It was 2013. Stephen Hoyle had just completed his first season in New Zealand after coming up through the youth programs at Barnsley and Doncaster Rovers in England.

At the time, Toronto FC’s coach was Ryan Nelsen, a New Zealander, so he brought Hoyle, who was 20 at the time, in on trial. It didn’t work out, but Hoyle did spend some time with the Toronto Lynx of the PDL before going back to New Zealand, where he’s since established himself as one of the top goal scorers in that country’s top league.

And when the current season in New Zealand is done, Hoyle will come back to Canada to play for Valour FC. His signing was announced Tuesday.

“I can keep scoring goals in New Zealand till I’m 35,” he said. “Or, I could come try something new.”

Hoyle has scored 31 times in 54 New Zealand Premiership appearances with Canterbury United. But, he still fondly remembers his trial with Toronto FC, and jumped at the opportunity to come back to Canada.

“It felt like New Zealand at the time,” he said.

He hasn’t met Valour coach Rob Gale in person as of yet, but from the phone conversations they’ve had, plus the extensive homework he’s done on Winnipeg — even reading a 64-page report on the city — Hoyle feels that opting for this shot in the Canadian Premier League is the right move.

“Rob Gale is pretty infectious,” he said. “I had a good connection with him straight away.”

Hoyle’s mom is a headmaster in England. So, he wasn’t satisfied with only playing the game; he wanted to learn whatever he could about it. He’s already got his “B” coaching licence and runs a youth program in Christchurch, which he’ll be turning over to a new coach when he leaves for Canada.

The inaugural Canadian Premier League season is set to begin in late April of 2019. The New Zealand grand final is set for March 31. For the moment, Hoyle says he’s focused on scoring the goals that will get Canterbury to the big game.

And, in other news, Valour signs two more

Honestly, it's hard to keep up with the Canadian soccer news. And, how often have we been …

Buy it at
Amazon