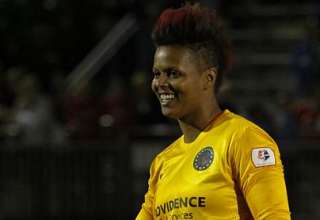 Outside of the family members of Canadians Jodi-Ann Robinson and Bryanna McCarthy, its hard to imagine that too many people on this side of the border will be cheering for Western New York Flash to beat the Portland Thorns in Aug. 31’s NWSL final.

After all, the Flash is home to Abby Wambach, the player who reminded referee Christina Pedersen about the time-wasting rule in the 2012 Olympic semifinal between Canada and the United States. Pedersen’s ensuing call against Canadian keeper Erin McLeod shifted a game that Canada was winning 3-2 at the time — and helped the Americans get the game to extra time, where they won it. Wambach has further endeared herself to Canadian supporters with her criticism of the decision to play the 2015 Women’s World Cup on artificial turf, a move endorsed by FIFA and which was part of Canada’s bid package.

Wambach, whether she cares or not, is seen as about as anti-Canadian as a foreign sporting figure can be in this country. So, in our eyes, that makes her No. 1 seed Flash, which hosts the final thanks to a 2-0 semifinal win over Sky Blue FC, as the brash U-S-A! U-S-A! group.

Robinson and McCarthy are depth players for the Flash, so that Canadian cheer-for-our-own urge is lessened.

Meanwhile, even though Alex Morgan — who scored the U.S. winner in that Olympic semifinal — plays for Portland, it is clearly Canada’s team. Christine Sinclair didn’t score in the Thorns come-from-behind 3-2 extra-time semifinal win over FC Kansas City, but Canada’s all-time leading scorer netted eight times for Thorns this season.

Sinclair was also involved in two of the Thorns’ goals in the semifinal, even though she didn’t score them. She was part of the build-up for Tobin Heath’s effort that made the score 2-1; she dummied a pass in the box that opened up a shooting lane for teammate Tiffany Weimer, who got the equalizer.

And, of course, she had the hat trick against the Americans in that semifinal, and was later suspended by FIFA for making public her feelings about Pedersen’s work. To us, she’s Captain Canada, and Wambach makes being a Sith look like not such a bad option.

And, Portland has Karina LeBlanc in goal. That makes two Canadian regular starters on the Portland roster.

It’s the Wambach vs. Sinclair rematch. USA vs. Canada. Except with two American teams involved. C’mon British Columbia, you can adopt Portland for a day, can’t you?

(Ed. note: This column is intended to stir the pot a bit. We don’t hate Americans in the least. Your awesome burgers that aren’t burned well past well-done, your California coastline, your taco stands, the fact you can fly across your country for less than $100, Grand Canyon, mighty Mississippi, NFL Sundays and your entrepreneurial spirit… some of the reasons why millions of Canadians visit regularly, and why so many of us retire in your wonderful country. But, dammit, we have a rivalry, and we’re stoking that fire. In fact, that Wambach is seen as the scourge of God when it comes to women’s soccer in Canadian circles is a good thing for a sport; it needs rivalries to grow. Sport needs villains. So, when the U.S. team visits Canada in 2015 for the Women’s World Cup, and we all count like crazy whenever an American keeper touches the ball and scream and holler every time Wambach is in our sights, don’t take it to heart, America. We can still be friends. We promise to give Portland back to you sometime soon.)