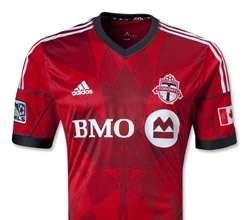 “I’ll tip my hat to the new constitution
Take a bow for the new revolution
Smile and grin at the change all around
Pick up my guitar and play
Just like yesterday
Then I’ll get on my knees and pray
We don’t get fooled again”
— The Who, “Won’t Get Fooled Again”

It’s becoming part of the club’s not-so-wonderful lore; that when Toronto FC does have a reason for hope, the dreams will die in New Jersey.

Heck, TFC has been buried in Jersey so often, that Jimmy Hoffa FC might be an appropriate rebrand for the franchise.

In 2009, TFC went to Giants Stadium needing a win to get to the promised land — and gave up five goals to a hapless Red Bulls team. The Red Bulls are a much better team in 2014 than 2009; that still doesn’t mitigate how poor TFC was in the first half of the 3-1 loss to the Red Bulls on Saturday. Now, TFC’s playoff hopes hang by a thread and, psychologically, the fan base has given up on the team.

With Tim Leiweke set to leave his post as Maple Leaf Sports and Entertainment’s head, it gives food for thought; what to do now with TFC? What would you do if you were president of the club?

With a major stadium expansion underway, the front office has a lot more tickets to sell, and those staffers will be making pitches for season-ticket renewals with the spectre of the Bloody Big Deal transforming into the Big Fizzle. Jermain Defoe has become a pariah; the discussions about him leaving the club over the past couple of months have made Dwayne De Rosario’s cheque-writing stunt look like a very, very minor part of TFC’s history.

So, with that thankless task ahead, what should Leiweke’s replacement do? Or should TFC get its own specific president who doesn’t have his or her eyes on the Raptors, Leafs and Marlies (and maybe the Argos, down the road)?

Here are some things I’d do if I was TFC’s new boss.

• Retain General Manager Tim Bezbatchenko and Coach Greg Vanney: Not only that, but I would guarantee to the fans that neither will be removed from their jobs in 2015. What TFC needs is stability, and to stop the coaching/management carousel. When a new coach inherits a team from the previous guy who had the job, it takes a year to a year and a half before that new coach can really say that this is the team that’s 100 per cent his. A new coach inherits a team; he needs to be given time to shape it in step with his general manager. Vanney deserves that time.

• Develop a Club Identity: It’s a lot more than a team name. It’s a lot more than colours. When you look at teams around the world, you know what they are about, from Celtic to Barcelona to Orlando Pirates to Boca Juniors. Of course, TFC hasn’t enjoyed the benefit of a century’s worth of history. But, outside of a few Voyageurs’ Cups, TFC hasn’t created much over the last eight years to celebrate. So, a new president can come in with a blank slate. I think, at this point, establishing an identity for the team is far more important than any player it can sign. Without sounding too much like a Canadian version of Chivas, I think what I’d do is promise to try and get as many Canadians into the lineup as possible. You might not be able to announce a hard number due to labour laws, but I would tell the fan base that, if we are going to develop the club, we’ll develop it on our own terms. Instead of building the team’s hopes around DPs, I’d base it on the fact that we’ll be the team where Canadians will get the chance to play — not in the USL or in exhibition games, but in MLS — and, damn the results, that’s how we’ll grow.

• Develop a Style: Once Vanney institutes how he wants the team to play, that system filters through the academy. You sit Vanney down, and tell him he has freedom to remake the system as he chooses.

• Dedicate a Good Chunk of Scouting on NASL: Mark Bloom was acquired from the Atlanta Silverbacks. We’ve seen Miguel Ibarra (USA) and Hanson Boakai (Canada) recently called up to their national teams. As someone who covers NASL on a regular basis, I know that there are a few gems here who could really help an MLS side (think Luke Mulholland in Salt Lake City). You’d be more likely to find depth and players who can legitimately help you by sending scouts to Tampa and Edmonton and San Antonio than by making those ballyhooed trips to Europe and South America.

• Study Real Salt Lake and Copy as Much of What that Club Does as Possible: This is a team that plays in a much smaller market in Toronto, has built itself into a major part of its sporting community, and makes the playoffs like clockwork. RSL has showed you need to build a team with a backbone of very good players who aren’t DPs. Much like NHL teams would be served to look at how the Red Wings build despite having poor draft positions, RSL is a model for MLS on how to bring players through the system, and how to sign players you need, rather than the ones that might be sexy for the fans. RSL understands more than any other MLS club that winning is the No. 1 thing that helps build attendances and a club’s relevance.

• Don’t Be Afraid to Tell the Truth: Going into next season, the attitude of the team should be based on honesty, not bluster. Remember that, in the previous off-season, there was talk about how fans would be sorry if they didn’t renew, with so many big changes to come. Whoops. This time, no promises at — except to be a more stable, consistent franchise. No promises of future glories or big name players. Tell the supporters you are going to work your tail off to make the team better, but the understanding is that there is a long way to go. No one is going to have faith in fresh start No. 638,212 in this team’s history — so don’t go there unless you’re willing to go the whole way and rebrand the team. And when we polled fans on that in 2013 (CLICK HERE), that was a no-go. For the fans who decide not to renew their season tickets, apologize and pledge to them you’ll do your best to earn back their business.