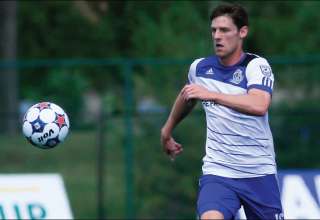 When Daryl Fordyce came to Edmonton from Northern Irish side Linfield in 2013, you’d assume that he probably knew next to nothing about the city.

But you’d be wrong. Sort of. He didn’t know much about the city itself, but the striker had at least heard the name the Alberta capital. When he was a teen, Fordyce was in the system of English side, Portsmouth. He remained there until 2007.

The former Canadian youth player, who now plays for Bosnia-Herzegovina, came to Edmonton with his family during the civil war that shredded the former Yugoslavia.

“Back in Ireland, Toronto is the city you hear about, the biggest city, and Vancouver and Montreal,” says Fordyce. “I heard about Edmonton through Asmir Begovic, the goalkeeper, because he’s from here. I really didn’t know much about the club. I used to live with him in Portsmouth. We shared an apartment for about a year. I got to know

Now, he’s FC Edmonton’s leading scorer, while Begovic has established himself as one of the top keepers in English Premiership, with Stoke City.

As Fordyce and his wife have decided to settle in Canada, and spend winters here, the irony is that the FC Edmonton forward is now a lot closer to the Oilers, at least geographically, than Begovic.