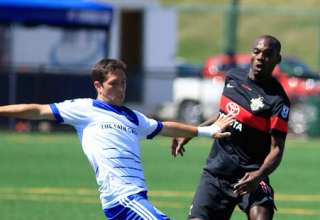 The two teams at the bottom of the NASL’s goals-against table met Sunday in Edmonton.

And their defending lived up (down?) to the billing. But, in the end, the Eddies made one more mistake than the San Antonio Scorpions did, and the visitors got a 3-2 triumph.

Sure, the Eddies rested several regulars. This was their third game in seven days, and the second leg of their Canadian Championship semifinal against the Vancouver Whitecaps comes on Wednesday. But the back line has been giving up too many goals all season long — now a whopping 15 in just six games. And Kareem Moses was the only back-line regular who wasn’t in the lineup Sunday. But, in a game where Edmonton did well to create a series of good chances, you can’t use the rotated lineup as an excuse. (And no one did.) The defending wasn’t good enough, plain and simple.

Since Colin Miller has been the coach of FC Edmonton, I’ve never seen him this angry after a game. Miller is usually generous in speaking to the broadcast crew whenever he’s needed but, after this match, he kept his words to a minimum. He simply said that there was little point in coming back twice — which the Eddies did in this game — if “Elephant and Castle defending” presents the opposition with easy chances.

Miller decided to leave striker Tomi Ameobi — who has scored in each of his last six games — and midfielder Ritchie Jones in street clothes. Moses didn’t play. And wingers Lance Laing and Sainey Nyassi were only introduced into the game after the hour mark.

The first goal of the game was scored by Scorpions’ striker Omar Cummings; after losing the ball, he got it back when a clearance from fullback Eddie Edward hit centre back Albert Watson in the thigh. Cummings took advantage of his second chance, curling a shot inside the post that brought us back to a time when he was one of the top strikers in MLS and won an MLS Cup with the Colorado Rapids.

“We had chances at four tackles and pulled out of every one of them,” Miller said.

The Eddies created some excellent chances in the first half, but Scorpions keeper stopped Darryl Sattler stopped efforts from Chad Burt and Daryl Fordyce.

But, an injury meant that Scorpions defender Julius James had to be subbed before halftime, and coach Alen Marcina inserted Zourab Tsiskaridze into what looked like a back three.

Early in the second half, the Eddies equalized when winger Michael Nonni was able to take advantage of Tsiskaridze’s absence; the defender was too far upfield and gave the FCE winger acres of space to work with. Nonni dropped a great cross to the far post that Johann Smith nodded across goal. Fordyce slammed the ball into the goal.

But Forbes restored the Scorpions lead very quickly. Forbes sprinted behind the back line, and a large number of the Eddies players had their hands up looking for the offside flag. But the linesmen was right to keep the flag down; Roberts was caught well behind the rest of his defensive line and was clearly playing Forbes onside. Forbes cut towards goal and then chipped the ball over keeper Matt Vanoekel.

“I knew when he came out that he wasn’t going to stay on his feet, so I knew then I was going to chip him,” said Forbes.

Forbes said that, after the 60 minute-mark, he felt he was able to use his speed to take advantage of a tired Eddies’ defence.

The Eddies got their second equalizer of the afternoon when substitute Hanson Boakai pounded a shot towards goal that Sattler stopped, but couldn’t control the ball. The rebound sat in the area, and Fordyce placed it into the open net.

But, even before Forbes’s second goal of the game, there were warning signs. Vanoekel had to make a diving stop on Cesar Elizondo, then stopped Cummings on the rebound. But the chances were created because Vanoekel’s initial kick smashed off the back of Watson and into the penalty area.

And Watson looped a header behind his own back line, and Forbes took it and went in alone, but Vanoekel came out and stopped the ball with his face.

After the game, Alen Marcina — the Scorpions’ Canadian coach — said that he felt his team wasn’t very clinical in front of goal.

“In truth, we should have had two or three more,” he said.

Now, the Eddies need to refocus ahead of Wednesday’s date with the Whitecaps at Clarke Field. Right now, the score is 1-1 but, after seeing their home undefeated streak snapped at 11 games (a streak that stretched back to last July), the Eddies need to look at the back end.