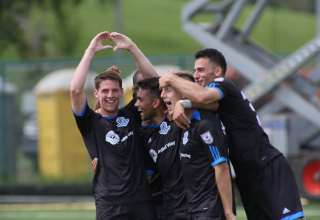 Mallan Roberts scored his first professional goal. Neil Hlavaty was a maestro in midfield against his former club.

For FC Edmonton, a spring season of frustration, a season of missed chances, a season of games that should have been wins turning into draws, was punctuated by a game where everything went right.

The Eddies beat Minnesota United FC 3-1 Sunday at Clarke Stadium, ending any hope for the Flyover Cup rival to have any shot at a spring-season title. The NASL is now down to a three-horse race — Carolina, Atlanta and San Antonio.

Minnesota came into the game knowing it would have to score early and often in order to make up the goal difference and points on league-leading Carolina. Instead, MUFC found itself down 2-0 in short order.

MUFC struggled to contain a new FCE attacking formation, with Shaun Saiko on the right side and Massimo Mirabelli on the left. Hlavaty was more involved in the attack from the centre of midfield than he has been at any other point of the season.

On the first goal, Hlavaty’s dead-ball cross was headed in by Roberts. The defender got the start and rushed up to meet the ball, as MUFC defender Cristiano Dias was caught flatfooted, unaware that Roberts had barged into the back-post area.

“I had a dream about it the night before,” Roberts said of the goal.

“I am so pleased for him,” coach Colin Miller (and current Canadian national-team gaffer) said of the Sierra-Leone born defender, who came to Canada as a refugee and is still waiting on his citizenship.

“He still has some things to work on, sometimes he is still a little too casual. But he’s a young boy and he has so much potential. He has no fear. I am being honest, had he had his citizenship papers in time, I would have called him up for (Canada’s May friendly) against Costa Rica. That’s how highly I think of him.”

“It is special to see a player get that first goal,” said Hlavaty. “I know I still have pictures of my first professional goal on my wall. And for him to do it in front of what is his second hometown, that’s got to be a special feeling for him.”

Hlavaty wasn’t done. After a neat one-two with Mirabelli on the left wing, Hlavaty flicked the ball in the air and ran onto it, freeing himself from a defender in the process. He then knocked a perfect ball across the pitch to Saiko on the right wing. Saiko crossed the ball into the box, where it was headed in by Daryl Fordyce, making it two goals in two games for the Northern Irish striker. Fordyce found dead space in between defenders Dias and Brian Kallman.

“If there is another player in the league playing better than Daryl Fordyce at the moment, I have yet to see it,” said Miller.

Dias’s nightmare of a first half wasn’t quite over. Right before the stroke of halftime, Minnesota keeper Matt VanOekel was called into a diving stop after Dias redirected a pass right towards to the top corner of his own goal.

Meanwhile, FCE keeper John Smits was called in to make two good stops; he rushed out of goal to take away the shooting angle from reigning MVP Pablo Campos, who had got behind the back line. And, he later made a diving stop to deny a Campos shot from just outside the box.

MUFC cut the lead to one in the second half; former Toronto FC trialist Justin Davis barged down the left side and crossed the ball to sub Miguel Ibarra, who finished neatly. And, with 20 minutes left in the match, Campos was robbed by Smits, with the Edmonton keeper getting low to stop a header from close range.

The game had one final dramatic change; Davis was called for bowling over Eddies’ striker Michael Cox. And, with Hlavaty facing his former team and having a blinder of a game, he asked Saiko for the right to take the penalty kick. Hlavaty finished it.

“I wanted to take that penalty, to score against my old team. I know Shaun takes a lot of the penalties, and I take penalties, as well. We discussed it.”

There may be a time when Saiko really want to take the penalty where Hlavaty will defer. But both are capable from the spot — and this time, Hlavaty was allowed to have the last laugh, to score the insurance goal that put the spike through the heart of Minnesota’s spring-season hopes.