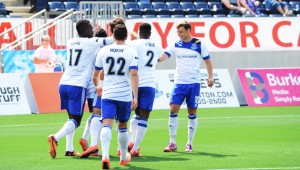 Miller joked that Smits said he was ready to go in and take penalties if need be. As in, taking them, not saving them.

It was so bad, that using Smits as a sub was not out of the question.

But, while the Eddies started off the game shorthanded, it was the San Antonio Scorpions who finished with just nine men on the field. And they faced a sombre 4,000-km-plus trip home to Texas from oil-sands territory after receiving a 4-0 hiding from the Eddies to open the NASL fall season.

This game offered plenty of talking points. Playing the first of two “home” games in Fort McMurray, the Eddies set a new CONCACAF standard; hosting the northernmost professional game in the region’s history. As well, the play of the Eddies’ young players — thrust into more prominent roles because of the injuries to the vets — had to be noted. Sadi Jalali scored on a penalty, Hanson Boakai scored a goal while on his back, and Allan Zebie put in another yeoman’s performance at fullback, neutralizing the threat of Scorpions speedster Billy Forbes.

And, then there was Lance Laing, who got permission from the Jamaican Football Federation to play in this match before heading to Los Angeles to join the Reggae Boyz for their Gold Cup preparations. He drew a penalty kick; he converted a penalty; and then he scored on a brilliant free kick — just another one for the highlight reel from, dare we say it, the best player in the league.

“It’s the result of practice,” Laing said. “I take a lot of free kicks in practice. It’s the repetition.”

Coach Colin Miller hailed the character of the players who came into the match. He said that many of his young charges took the chance to start the game — and, well, made the most of it. He hailed Boakai’s performance after the youngster was shifted from midfield to striker late in the first half. And he said that Zebie deserves praise for another confident shift at the fullback position.

As well, it needs to be noted that Matt VanOekel, who had been the subject of criticism in the first half of the season, made two vital saves — both on Omar Cummings — when the score was just 1-0.

In fact, at halftime — and trailing 1-0 — Scorpions coach Alen Marcina lamented his side’s lack of finish.

“We have to bury these chances,” he said. “We were the better team; we could be up two or three goals by now.”

But referee Yusri Rudolf’s work will also be questioned. In the second minute, he whistled Scorpions fullback Marvin Chavez for clipping Laing’s heel in the box. Laing had been sprung thanks to a fantastic through ball by Jalali — and Jalali was rewarded by getting the chance to convert the penalty. He sent Scorpions goalie Daryl Sattler the wrong way, and the Eddies were up a goal before some of the people had got to their seats or had settled into the luxurious row of private boxes in SMS Equipment Field at Shell Place.

How much contact was there? Well, let’s just say it started a slow burn amongst the Scorpions players.

Then, early in the second half, Canadian defender Adrian Cann bundled a ball into the goal off a corner kick; but the linesman’s flag was waving. Since there were two Eddies on the goal line, offside was out of the question. Was there a shove? To be fair, Cann put the ball in a second or two after the whistle, and VanOekel had already stopped playing. But it was hard to pick out why the play was stopped.

The Scorpions went from frustrated to incensed when Rudolf awarded the Eddies their second penalty of the game. Michael Nonni got behind the Scorpions Canadian centre-back tandem of Cann and Nana Attakora. Attakora reached out and grabbed Nonni by the shoulders. Nonni went down, and Attakora was sent off for the professional foul. But Attakora had to be restrained from going after the linesman who had flagged for the infraction. Was it a professional foul? Likely. Was it in the box. Not close. Not close at all. If you’ve followed my Women’s World Cup columns for Sportsnet, you know I’ve defended referees when they award penalties when the fouls occur inches outside the area. But, in this case, there was yards between the spot of the foul and the top of the box.

Laing stepped up, dispatched the penalty, and things got heated. As Laing celebrated with Boakai, Sattler kicked the ball directly at the two players. Rudolf sent him off.

Now down to nine men and back-up Matthew Cardone in net, the Scorpions could barely keep their composure. A ball was booted out of the stadium after a call. Rafael Castillo saw yellow for slamming the ball into the turf after a call went against him.

In the meantime, the Eddies took advantage. Boakai was knocked down by Cann in the area, but stayed with the ball and, from his back, swung at it with his boot. The result? A perfectly placed shot that froze Cardone.

Finally, Laing finished things up with a wonderful curler of a free kick, a curler that truly gave Cardone no chance.

I guess John Smits will just have to wait till the game to get his chance to play striker.

Japan all business ahead of semi vs. England