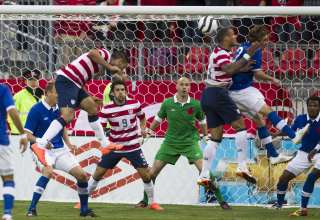 For a goalkeeper, any mistake or save on the pitch is magnified. The line between being a hero and scapegoat is a fine one.

On Sunday night, Canadian goalkeeper Lars Hirschfeld played the hero to preserve a scoreless draw against the U.S. at BMO Field. Moments before the final whistle, Hirschfeld dove and extended his hand to make a huge game-saving stop on Clint Dempsey’s header in the third minute of extra time.

Had Hirschfeld not made the save, his teammate Simeon Jackson would have been the fall guy for having missed a golden chance moments earlier when he put a Dwayne De Rosario pass just wide of the goal.

“I’m not too sure what happened myself,” said Hirschfeld, who is usually quiet and rarely speaks to the media. “It’s just one of those ones that comes in and it’s a reaction thing. It hit the hand and then I don’t even know where it went.”

The last time Canada played the U.S. it was the opening game of the Gold Cup a year ago and Hirschfeld gave up a bad-angle goal in Detroit that gave the Americans early control of the match. By falling behind, Canada was unable to execute its game plan and ultimately lost 2-0.

Hirschfeld has put the Gold Cup disappointment behind him but said it’s just part and parcel of being a goalkeeper.

“That’s the nature of the position. That one got away from me, I would have kicked it out, it squeaked under me,“ said Hirschfeld. “This one I just happened to zip it over.”

Hirschfeld has sometimes been criticized for his play but Julian de Guzman believes the goalkeeper proved his critics wrong for coming up big when called upon.

“Actions do speak louder than words and he proved that today. That was a game changer moment for us I think,” said de Guzman.

“Lars has always been a huge factor for our side and he has played a great role of being that backbone for us. And with his experience and intelligence he definitely showed that throughout the 90 minutes today and he was able to bounce back and prove to all the critics that he belongs in the number-one spot.”

Something to Build On
As part of the Canadian Soccer Association’s centenary celebrations and the game being against the U.S., the attendance was disappointing with only 15,247 fans showing up for the match. American supporters, the American Outlaws, showed up in decent numbers — roughly 700 fans — to take up more than half of the north grandstand and made their presence known.

After a shaky start and sometimes sloppy first half Canada outplayed the U.S. the rest of the match. Wearing special commemorative jerseys, the “blue and white” home team created numerous chances with de Guzman and Jackson firing at goal in successive attacks midway through the second half but were turned aside by Tim Howard. The best chance came in the second minute of stoppage time as De Rosario created space near the end line to set up Jackson but the striker rushed his shot and fired wide.

Coach Stephen Hart has talked in the past about his players needing to be more clinical in front of goal and that was the case again — but De Rosario thinks the goals will come in time.

“Our forwards did well they had the ball up at good times and tried to get us in the game, midfielders and forwards and I think they did a good job. On another given day hopefully we finish up with an end product.”

Canada thought it had scored in the 34th minute when Nik Ledgerwood got behind the defence to chip a shot over Tim Howard but the linesman had his flag up. De Rosario contested the call but in the end no real reason was given.

“There wasn’t any real explanation. I asked him what was the call and he just said free kick and he didn’t really explain why. It wasn’t a foul. I don’t understand up until now but you’re going to have calls like that against you and you have continue and stay positive.”

Despite the lack of finish on the offensive end, the pleasant surprise was the play of Canada’s defence. The team held together defensively each time the Americans pressed for an attack and that should bode well against the Cubans who won’t have nearly as many potent offensive options.

“We’re using the time to basically to get the communication right between us, the unspoken communication which is the most important, positioning,” said Hirschfeld. “I think they really did a good job and my job a lot easier today.”

The friendly ultimately meant nothing for both teams as each prepares for the World Cup qualifiers beginning next week, but for Canada it was an important to get a result. Not only because it was against its rivals
south of the border but because the team needed to something positive to build on heading into the game against Cuba next Friday after not having played for three months.

“The objective was to work on certain things as a team that we think we need to do to go forward,” said Hart. “It wasn’t about stopping the United States or any particular players. I thought we showed good organization, good patience defensively and allowed us to get several opportunities on the transition, on the counterattack.”