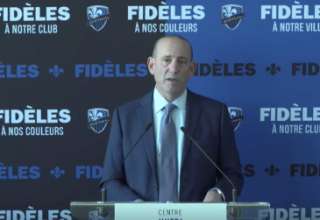 As a soccer supporter in Canada, I want to see the game succeed, and I’m not super-choosy about the avenues it needs to take to reach that success. Does a big metropolis need to be part of a greater North American league? So be it. Will a Canadian league build the grassroots and finally establish the game coast to coast? I’m behind that, too.

But, there are days, my word, there are days when you look at MLS like the most annoying girlfriend/boyfriend you’ve ever had. Being a Canadian fan of MLS is like watching your partner flirt with everyone at the bar, but the second you say you’re done, that person’s back with a gift and a promise that really, this time, (s)he’ll change.

You love it despite yourself. You love it because you love your club or you love the sport too much. So, whenever it says to you, “give me another chance,” you open the door and say “yeah, maybe we can work it out.”

On Tuesday, MLS commissioner Don Garber was in Montreal. And he promised that the league would open an office in Canada (this promise is not new, by the way). The timing of the announcement comes just days after the Canadian Soccer Association gave its blessing to the Canadian Premier League, and two CanPL clubs — in Hamilton and Winnipeg — were officially unveiled.

MLS has no plans to grow its footprint in Canada outside of the big three cities, and the Canadian men’s soccer program has seen little in terms of improvement since Toronto FC first kicked a ball a decade ago. We have seen NASL and USL grant full domestic status to Canadian players league wide, but MLS has created a complex rule that allows some Canadians to be domestics but the majority are still considered foreigners on the rosters of American teams.

So, ee’ve realized that, for Canadian soccer to grow, we might need to go our own way. To forge our own path. A Canadian Premier League is real. And, just a week after we’ve officially said, “dammit, we are gonna go our own way,” Garber was back on our front door, offering what he could as his version of a box of chocolates. All he needed to add was “Canada, sometimes I think you’re too good for me,” to the speech.

But, like any bad relationship, there’s a blame card to be played, too. “I wouldn’t look at all those other girls if only you’d pay more attention to me.” And Garber played it, stating that Montreal wasn’t doing quite enough to support MLS.

“I’m also very excited to be here a day before the 375th anniversary of the (city),” Garber said as he opened his press conference. “We had thought long and hard about perhaps doing an All-Star Game many years, when Joey (Impact owner Joey Saputo) just came into the league… We were thinking hard about doing a big event in and around it. We were meeting with Joey and his staff, over the last couple of years we realized we really have a lot more work to do here in the community, to get the kind of support, to get the kind of engagement, to get the right kind of partnership with the city and others throughout the community, to bring an event like our All-Star Game to Montreal.”

This was not an answer to any reporter’s question, it was part of Garber’s prepared preamble. He went into the conference wanting to make the point that Montreal, with its soccer-specific stadium, its top-10 attendance in the league, the fact that it drew over 1 million viewers in Canada for its playoff series against Toronto FC, well it just wasn’t quite enough.

Garber then went on to say that even he couldn’t have predicted the amount of interest and passionate crowds drawn by the Montreal-Toronto series. (But Montreal, you’re not doing enough).

“It really truly defied our expectations. And it showed us, in living colour, what this sport can be in this country,” said Garber. (But MLS has no plans to further expand into Canada, cough).

Garber then brought the box of chocolates out again, reminding us about the Generation Adidas Canada program, which subsidizes the contract of Canadian phenoms, and the coming MLS Canada office.

He then said that Joey Saputo is an “incomparable” owner (But Montreal, you’re not doing enough).

So, we open the door, let MLS back in. But this person needs to understand that we just might have decided to see other people. We’ve got #CanPL’s number.