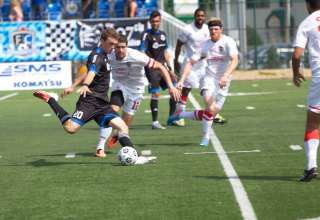 The new strike partnership of Anthony Adur and Corey Hertzog made its FC Edmonton debut Sunday — and the duo were key in giving the Eddies a 1-0 win over the San Antonio Scorpions in their NASL fall season home opener.

Adur has been with the club — as a signed player — for a week. Hertzog arrived in Edmonton on loan from the Vancouver Whitecaps on Wednesday. But they were dangerous, and both players had parts in the goal that squared the Eddies’ fall season record at 1-1-0, one point behind the NASL deal.

Meanwhile, despite making a bevy of July signings, the Scorpions are now 0-2-0 and sport a league worst -4 goal difference.

“Corey’s been here for three days, I’ve been here for a week, and for us to click like that, it’s great,” said Adur, a former Maccabi Haifa youth player who has also had pro stints in Singapore and Thailand. “I think the two of us are going to become a special story in this league as the season progresses.”

After starting the game by blasting high on a pass laid to him on a platter by Adur, Hertzog made amends in the 15th minute. The play began when FC Edmonton midfielder Chris Nurse looked to lose the ball, but made a crunching, clean challenge to win it back. He sprayed the ball on the right side for Adur, who laid it off for Neil Hlavaty. Then, Hlavaty sent a low cross which found Hertzog in the middle of the box. Even though Hertzog had two Scorpions on his back, he made a deft turn and placed a low shot by keeper Pat Hannigan.

“It all started with Nurse’s tackle in midfield,” said Hertzog. “If it doesn’t happen, we don’t get that chance.”

Throughout the first half, Adur and Hertzog pressed the San Antonio back line. Coach Tim Hankinson elected to have the Scorpions press very high, with four attackers going forward and the back line willing to gamble. With league leading-scorer Hans Denissen, along with new signings Tomasz Zahorski and Borja Rubiato (who came in a as a sub on Sunday), the Scorpions are looked to play a run-and-gun game. But the club’s lack of attention to the defensive side has seen it allow eight goals in the first two matches.

San Antonio did create chances; the visitors looked dangerous on set pieces, and Zahorski had a deflected shot cleared off the line by Eddies’ defender Edson Edward.

But the Eddies put pressure on the San Antonio defenders, regularly getting in behind them. A cross from Hertzog was laid off by Shaun Saiko into the path of Nurse, whose bullet shot was deflected away from goal by Scorpion six-foot-six defender Luka Vucko. And, as the second half came to a close, the Eddies had a three-on-two break. Hlavaty played the ball to Adur, whose point-blank shot was charged down by Hannigan.

“We should have been able to score at least five goals,” said Adur. “So we have to get back the office this week and work on our finishing.”

The Eddies had another stellar chance to take a two-goal lead early in the second half. It all began when San Antonio’s Javier Saavedra, lunged to try and keep a poor pass from going into touch. Rather than surrender the throw-in, Saavedra tried to save the lost cause, and the out-of-control touch he made on the ball sent it right to Adur — who lobbed the ball into the box for Saiko.

Saiko volleyed the ball, and his drive went crashing off the post.

But San Antonio did have some final surges. Saavedra later found the woodwork, with his free kick finding the joint of post and crossbar.

And Denissen had the best chance of all; he got to a cross and headed it down. The ball took an awkward bounce, and it wrong-footed FCE keeper Lance Parker. But, hthe keeper was able to get up on his toes, get his fingers to the ball and tip if over the bar.

But, in the final 20 minutes, with FCE defending the goal, San Antonio’s chances dried up, and centre back Albert Watson and Mallan Roberts dealt calmly with the crosses and long speculative balls that came their way.

After last week’s loss in Carolina, one that Miller said saw the Eddies play the worst first half of football he’d ever seen, the team showed grit in its win over San Antonio. The goals still aren’t coming easily, but the league’s best defence held against a team that scored four in the previous week’s match.

“Last week’s game was not the kind of performance we expect out of our team,” said Miller. “And they reacted.”

Miller said he got a text message from Vancouver coach Martin Rennie, indicating how pleased the MLS side was with the development of central defender Carlyle Mitchell. The defender was supposed to be on loan for the entirety of the 2013 season but an injury crisis at the Whitecaps forced his recall; he’s expected back in Edmonton once Jay DeMerit is cleared to play for Vancouver. And, the Whitecaps will no doubt be pleased that Hertzog has made an impact just days after he was loaned to the Eddies.

“If you loan us a player, we want to send that team back a better player. We have a very good relationship with another club. And when Anthony and Corey get their legs to play 90 minutes, we can expect better things. Soon (striker) Daryl Fordyce will be healthy, then (new signing) Gagan Dosanjh will soon start training. And that’s going to give us real competition for places. I will have some hard decisions to make on who stays in the team.”