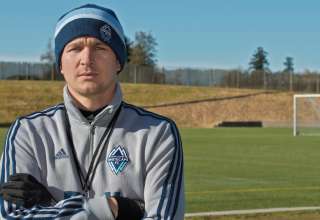 He’s been involved with Major League Soccer since he made his Toronto FC debut in 2007; but Carl Robinson’s first few months as a head coach haven’t been easy. From the perception that he was the fallback guy in the coaching search, to dealing with a star player who wanted out, Robinson has been under fire before the Whitecaps played their first MLS match of 2014...

About 250 years ago, Llandrindod Wells came to some local fame due to the miraculous powers of the local spring waters. Have a dip in that stuff and your aches and pains, and perhaps your sickness, would become a thing of the past.

The Vancouver Whitecaps are hoping Carl Robinson brings those healing powers from his Welsh hometown to the Pacific Northwest in his new role as head coach, as the club looks to rebuild and establish some sort of consistent success in Major League Soccer after failing to make the playoffs in 2013.

Robinson has been in Vancouver for two seasons already, having served as former coach Martin Rennie’s assistant, but now the 37-yearold has a chance to impose his vision as the main man for the first time in his career.

It’s a challenge the former Wolverhampton Wanderers and Sunderland player relishes, although he admits he would have stuck around as an assistant in Vancouver for as long as a decade if he felt he was still growing and learning.

Robinson’s appointment comes at a crucial juncture for the Whitecaps. Entering this season, the club’s fourth in MLS, he is Vancouver’s fourth head coach. That sort of turnover is not the typical formula for success, and the hope is the former central midfielder is here for the long term.

Regardless of whether his stay as gaffer is for the long haul or a brief time, Robinson’s goal is to work with a young group the club can build around for the best part of a decade.

“We’ve got a fantastic core of young players and the one thing I’ll do is give young players opportunities,” Robinson says at his compact, spartan office within the club’s training centre at the University of British Columbia, ink still fresh on a white tactics board mounted on the wall. “Sometimes I won’t always get the results I want, but I will give them the chance and the stage to perform.

“One of my main aims and goals of taking this job and this role was…when I do leave or how long that will be, whether that’s five years, 10 years, whatever, the club will be in a much more stable state than what it was when I’ve come to it.”

There are plenty of others here too in their teens and early 20s who could fall under that category, but they have little or no MLS experience so it’s too early to say how they’ll do.

Uruguayan newcomers Nicolás Mezquida and Sebastián Fernández are technically gifted, draft pick Christian Dean, a defender, looks like he has something to offer, and left back Sam Adekugbe of Calgary looks the best of the recent residency program graduates after making his MLS debut in last season’s final league match.

While ownership and the club’s leadership group like the sounds of their new coach’s youth movement chatter, Robinson isn’t just carrying out orders from upstairs, and says he expects no job security as a result of his decision to play inexperienced players.

“I think the club wants to promote young players,” Robinson says. “I certainly love working with young players, and I’ll give young players opportunities, but having said that, I know it’s a results game. It’s important I get results while playing these young players.

If there was any element of naïveté or a blissful honeymoon period for Robinson upon learning he’d been appointed for the role, it didn’t last long.

Just one day after the club unveiled him as their new manager, ESPN Deportes reported on December 17 that reigning Golden Boot winner Camilo was down in Mexico, hoping to engineer a deal with Liga MX side Queretaro FC.

Robinson and Whitecaps President Bob Lenarduzzi would travel to Mexico shortly thereafter, to deal directly with Camilo and try to secure his return to Vancouver – an ultimately fruitless endeavour.

Exactly one month after that initial report, Vancouver confirmed the sale of their Brazilian star – who bagged 22 MLS goals in 2014 – for a club record seven-figure fee believed to be in the range of US$2 million.

Welcome to life as a head coach, Carl.

“It was a fantastic few hours for me and my family, because I had just become a head coach of a Major League Soccer team, and suddenly you’re dealing with a situation that has arisen,” Robinson says. “The Camilo situation was something I’ve never seen before in my life, and I hope to never see again…I understand it because I’ve been in that situation before when I’ve moved clubs, but what I wouldn’t accept was the unprofessionalism that he showed and I needed to put that point across to him and I did.

“He accepted it, we shook hands, and now obviously fast forward and the deal’s done, the club are moving on in a different direction because we need to.”

Compounding Robinson’s drop into the deep end was what appears to be a flub on Major League Soccer’s part with regard to seventh overall draft pick Andre Lewis.

Clubs were informed before the draft that the Jamaican was signed by the league, but NASL side New York Cosmos beat MLS to the punch; meaning Vancouver had to either loan or buy Lewis in order for him to play for the Whitecaps – something the club said wouldn’t be an issue shortly after the issue came to light.

Before the MLS campaign began, the Whitecaps assigned Lewis to its USL affiliate, the Charleston Battery.

“You wait 20 minutes for one bus and two come along at the same time,” Robinson says. “That’s what happened with Camilo and then Andre Lewis.”

For a club in transition, neither of the situations inspired confidence among fans. Social media was abuzz with jibes against the club’s five-person football committee, a set-up that confuses many in the Vancouver sporting scene. In real terms, boards are common in the soccer world and in the business world, and the criticisms were borne more out of frustration rather than logic.

In any event, when either of those situations is scrutinized, it was the league and not the Whitecaps that were at fault. Camilo’s agent forced the Mexican move by bringing into question the legality of unilateral options built into many MLS contracts, and the Lewis situation developed as a result of the league providing erroneous information to its clubs.

But while some fans have been critical of the club at large, Robinson has emerged without any ill feelings directed his way. Justifiably so – he wasn’t at the helm when Camilo was hinting at more money, and the Lewis kerfuffle was again an issue that one could argue was more a bungle on the league’s part.

From the Whitecaps perspective, Lenarduzzi states Robinson’s handling of the media scrutiny passed the test.

“It’s been a bit of a baptism by fire for him, but as I’ve always said, you find out most about people when they’re in adverse situations,” Lenarduzzi says at the Whitecaps offices in downtown Vancouver. “Everybody does well when things are going well.”

Robinson was already dealing with another challenge; from the point he was named coach, fans had the perception that he was a fallback option – this after the Whitecaps pursued the likes of former U.S. and Egypt coach Bob Bradley (Bradley declined the offer to coach Vancouver to manage Norwegian side Stabaek).

Canadian Frank Yallop, who later signed on to become the coach and technical director of the Chicago Fire, was also linked to the Whitecaps job.

“I don’t for one minute blame the club to go and explore every opportunity,” Robinson says of the club’s pursuit of Bradley and others. “If they don’t do their homework and get the best possible person for the job, then they haven’t done their job totally… it would be naïve as a club not to go and interview Bob Bradley.”

But, ultimately, Bradley decided to pursue the European dream, and Robinson got the job. But it’s not as if Vancouver was hard up for candidates. According to the man who eventually got the position, there were over 200 applications and he emerged on top.

And now that he’s been chosen as the man to lead Vancouver forward, the ultimate aim is to build a foundation for long-term success.

“Everyone’s got a dream,” Robinson says. “My dream is that I want to go manage in the Premier League in England. Will that dream happen? I don’t know. I’ve been a given a fantastic opportunity to be here at the club, a fantastic organization – one I’m going to take with great pride and great honesty, and move forward with that.

“If you ask me, do I want to be at this club for 10 years as we continue moving forward? One hundred per cent I do, yes. Will I be? Who knows? You don’t know what’s around the corner, but I want to be a big part of this club as it continues its growth and development to be successful in MLS.”