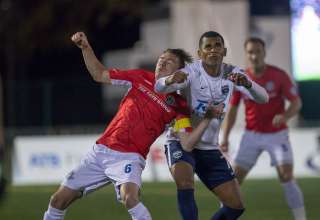 It was halftime of Friday’s match between Jacksonville and FC Edmonton at Clarke Field. The game was tied 0-0. FCE coach Colin Miller said that he was pretty happy about the way his team had played in the first half. He said he was happy about the way the players applied themselves.

Eddies’ forward Jake Keegan had the best scoring chance of that first half, heading a cross from Sainey Nyassi off the bar.

But Miller admitted he was worried that the Eddies would have one of their “Santa Claus moments” and gift the opposition a chance.

Unfortunately for the Eddies, Miller was right to be worried. Santa Claus did indeed show up in the second half.

Ciaran Kilduff was left wide open to head home the only goal of the game, and the Armada got its fourth win over FCE this season. All four of the matches have ended 1-0.

“It’s criminal,” Miller said after the game. “We don’t get tight on the cross and then we give up a free header. It’s the story of our season — poor defending at times.

“It’s devastating. We put so much into these games, and we go down to defeat again.”

Kilduff was being marked by Edmonton centre back Pape Diakite; but, as the cross came in, Diakite decided to leave his man in a vain attempt to try and get his head to the ball. He charged away from Kilduff and leaped for the ball. The ball sailed well over Diakite’s had, and Kilduff was then conveniently wide open to head it home.

The goal came only minutes after FCE keeper Tyson Farago sprawled to save a breakaway chance from Derek Gebhard, off a counter attack that was set in motion by a poor cross-field pass from Diakite. He was well out on the left wing and decided to play the ball out onto the right; the pass wasn’t accurate, Jacksonville countered, and Diakite wasn’t in his normal centre-back spot to shut the door.

With the win, Jacksonville moved back into fourth place in the NASL overall standings, the spot that represents the final playoff spot.

“I guess two wins now in Edmonton in my NASL career,” said Drew Beckie, the Armada’s Canadian centre back, who experience a lot of frustration at Clarke Field as a member of the Carolina RailHawks and Ottawa Fury. “It’s a tough place to play, but we’ve done well. We’ve struggled against Miami and some other teams, we’ve gone up and down. But it looks like, with four games left, that we’re going to battle till the end.”

Beckie admitted that, as is the case with all NASL teams, the Armada’s players are dealing with a lot of distractions. They know that the league will be looking for an injunction Oct. 31 in U.S. federal court that would allow it to keep its Division-2 status for next year. The league has stated that if it doesn’t get the injunction, it won’t survive.

“When you hear about what could happen or what is happening, you have to be professionals and finish out the season. But guys like to plan for their families, guys like to plan for themselves — and what may happen next year is a 50-50 thing. You can’t worry about it now, but it’s going to be a reality in a month. SInce guys only get paid through November on most teams, it’s tough. You’ve got to go through the off-season. I think we deserve to be paid 12 months a year and that’s a frustrating thing for myself and a lot of guys, and, with the insecurity of the league, guys have to start looking elsewhere and do it at the right time. But you have to be professional and finish the season out and go from there.”

The Eddies were without their two leading scorers, Tomi Ameobi (knee) and Dustin Corea (call-up to El Salvador for Sunday’s game against Canada). The team’s all-time leading scorer, Daryl Fordyce, failed a fitness test due to a foot injury.

That meant that teenager David Doe made the bench. And, a week after teenager Abraham Dukuly made his debut, Doe came on as a sub. He made a clever run that drew a free kick opportunity for Nicolas Di Biase. The free-kick forced Armada keeper Caleb Patterson-Sewell to leap so he could get a strong hand to the ball.

It was as close to a comeback as the Eddies would come.