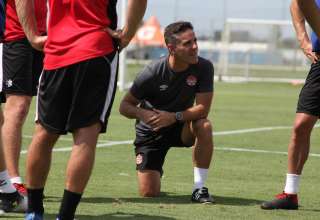 Canada opens its Nations League qualifying campaign in Florida this Sunday against the U.S. Virgin Islands.

Canadian fans are expecting a basketball score. They want to see Jonathan David and Alphonso Davies each get halfway to the Canadian goal-scoring record, against a team most of us know nothing about. Even though Canada is by no means a world power, a game against what coach John Herdman calls a “tier-three” opponent is expected to be a goalfest.

And, with those expectations, comes danger.

“It’s one of those tier-three matches that, when you frame this up for the players, it’s a different challenge than playing against a Mexico,” Herdman said in a conference call from Canada’s camp in Florida on Friday. “There’s an expectation to rack up a scoreline.”

And, he admits that if the Canadian players don’t have the right mindset, a game like this “can breed a lot of frustration.” If the goals don’t go in right away, there’s a danger that what the team is trying to achieve tactically can fall apart, as players each take on too much. Players can lose discipline. Look, we’ve seen this over and over when a big favourite has a hard time with a minnow they were expected to beat by a lot. If the favourites are up just by a single goal, the fans are groaning because it’s not out of sight after 15 minutes.

So, Herdman is clear, that he expects this game to be a place where players “create a mindset to get a result.” It’s simply a first step as the team tries to build an identity.

“Our attacking identity is critical,” he said. “We’ve really been working on it this week.”

And that means activating the fullbacks in a way that some might not be used to when they appear for their club teams, or how they’ve played in the past for Canada.

The end goal — which won’t be achieved by the end of this weekend, we’re only kicking off the Nations League, after all — is to have the team proficient in what Herdman calls his “four moments” of the game. For those not familiar with Herdman’s coachspeak, the four moments are: Attacking organization, attacking transition, defensive organization and defensive transition.

“You don’t get together too often,” Herdman said. “It’s about having the clarity to play… in our four days together, we’ve got tighter.”

But the Nations League isn’t easy for Herdman. Because Canada will play so many games in CONCACAF, it will affect the European based players. Canada won’t have as many Europe-based camps as it used to. Players in European leagues will need to make more trips, and Herdman admitted some will be under pressure not to make “the 27-hour trip to St. Kitts” for a CONCACAF match. As well, because CONCACAF games are often played in punishing heat and humidity (it’s expected to be over 30 C at kickoff Sunday), those European teams will be concerned about wear put on their players through Canada’s training sessions and games.