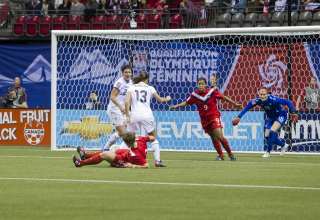 It was over before all the fans were even inside B.C. Place to make it to their seats. The United States scored early and often in the first half en route to a thoroughly dominating 4-0 win over Canada to win the championship at the 2012 CONCACAF Women’s Olympic Qualifying Tournament.

Alex Morgan stole the show as the focal point for the American attack. Morgan scored twice and set up the other two goals as the full house of 25,427 fans that packed into the stadium were hoping for something special but in the end, the world’s top-ranked team and World Cup runner-up was at its absolute best.

It didn’t take long to silence the capacity crowd as Alex Morgan scored in only the fourth minute. Morgan showed off her fantastic pace as Abby Wambach flicked a high ball. Morgan gained a few yards on Shannon Woeller and Candace Chapman as she blew by them, gained control of the ball and went low to the right of Erin McLeod.

Canada had a chance to strike back in the 18th minute as Christine Sinclair, who the U.S. defenders were playing very close attention to, fed a through ball to Christina Julien. United States goalkeeper Hope Solo was quick off her line to close the ball down and got the worst of it as Julien came crashing into her. To her credit, Solo got right back to her feet.

“We’ve got to look at ourselves first — the management team,” said Canadian coach John Herdman. “What we could have done better — whether it was the selections, the order of the substitutions — some of the tactics where we could have played things quicker or made a bigger impact with certain things. But I can’t fault the players’ effort.”

Morgan was the provider as the Americans doubled their advantage in the 24th minute. Megan Rapinoe put a great through ball in on the right hand side to Morgan who took it to the end line before putting in an inch perfect cross that Wambach rose well to head home. On the play, McLeod collided with Gayle and both took some time to get up but both stayed in the game.

“The U.S. is just such a strong team. You can focus on trying to shut Wambach down or whomever,” said Canadian star forward Christine Sinclair. “They have 10 other players that can do the damage. They’re just a strong side from in the goal all the way up top. They don’t have a weakness.”

The Morgan-Wambach tandem was back again in the 28th minute. After Carli Lloyd’s shot from well out came back off the post, Morgan fended off Woeller before knocking the pass into Wambach who didn’t have to move to poke the ball home from close range.

Wambach’s second goal gave her 131 international goals which moved her into second place on the all-time international goal scoring list. She now only trails Mia Hamm on the list. Hamm finished her career with 158.

“Her skillset is, I think, completely opposite of mine and that just makes for a nightmare for any defences,” said Wambach, praising her teammate Morgan. “She’s so fast and not only is she fast but she’s strong on the ball so if it’s a fifty-fifty challenge, especially if it’s a goal scoring opportunity, she’s likely to win it and likely at least get her shot.”

As has often been the case in this tournament, officiating came to the fore as, with just under 10 minutes remaining in the half, American Megan Rapinoe seemed to deliberately take out Julien. While there could have been an argument for a red card as the ball was nowhere near involved in the play, in the end the referee didn’t even award a free kick.

Just a minute before the half, Julien was played in all alone on Solo but Solo proved why she’s the top goalkeeper in the world as she perfectly cut down the angle and stopped Julien from close range. Canada just had no response for the overpowering Americans who saved their best game in the tournament for the final.

Morgan’s speed was once again on display in the lead-up to the Americans’ fourth goal. The pacey forward took a pass from substitute Lauren Cheney and slalomed through Canada’s back line before putting the ball in the net.