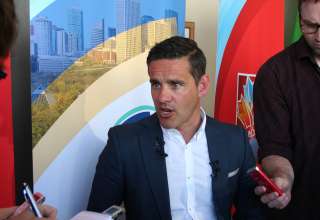 Through the Women’s World Cup, the scouting report on the Canadian national team was pretty consistent: Well organized, tough to break down, but offensively challenged.

Coach John Herdman wants to change that. He said that, ahead of the CONCACAF Olympic qualifying tournament, he’s looking to bring in some young “mavericks.” In his words: “The mavericks is an exciting one… recruiting young players who play freely, risky football, they have technical competencies in certain positions. And they’re going to get their chance to bring it alive.”

They are players who like taking on defenders one-vs-one and, well, are a bit undpredictable.

Herdman feels he’ll need those x factors heading into qualifying for the 2016 Rio Games. The draw for the tournament was announced Monday, and Canada should be overjoyed by getting what, is at first glance, the soft-touch group. The Canadians will face Guatemala, Guyana and Trinidad and Tobago in Group B action this February in Houston. Meanwhile, the United States gets Mexico, Costa Rica and Puerto Rico in its group.

But Herdman stuck to the mantra that the gaps in women’s football are continually closing, and he said the group-stage games will present their own unique challenges. If Canada was to play one of the bigger CONCACAF nations, it could expect a more free-flowing game. But, we can expect to see a lot of parked buses in the games against Guatemala, Guyana and Trinidad and Tobago.

“They’ll try to minimize the space in and around the goal,” said Herdman. “Typically, they’re going to let you come to then and capitalize on their mistakes.”

He did note that T&T lost by only a goal each to the Americans and the Mexicans in the most-recent round of World Cup qualifying. And while he hasn’t seen much of the Guatemalans, but he knows from recent results that they’ve played Costa Rica awfully tough.

But, there’s an added piece of intrigue. Traditionally, if you’re not in the United States’ group, you want to win it so you can avoid the Americans in the semifinal. But this time around, the U.S. is in as close to what you could ever call to a Group of Death in an Olympic qualifying tourney.

“The U.S. might slip up in the group, so you might find them in the playoff matches,” said Herdman. Basically, Canada could win its group, and still have to face the Americans in the semis.

The semis are the most important games of the tournament. The winner of Group A faces the second-place team in Group B — and vice versa. The winner of the two semifinals qualify for the Olympics.

Canada’s mavericks will join some of the veterans at the Natal tournament in Brazil. Canada will face Mexico, Croatia and Brazil at the December tournament. The roster is listed below. It’s a mix of veterans and younger players who didn’t make the World Cup squad. But Herdman said the plan was always to bring youth through the 2015 Pan Am Games, and that the players all knew where they stood. He said there are no chips on the shoulders of players who didn’t make the WC roster.

“To be honest, I haven’t had that sort of conversation with any of the players. The players that didn’t make the World Cup were very clearly identified for the Pan American Games. And, for some players, we already recognized that they may have had a bit-part role in the World Cup but we wanted to make them fully available for the Pan American Games where they could play five games back-to-back against teams that just competed in the World Cup. So, as part of our planning, players like [striker] Janine Beckie, who you try to balance NCAA commitments as well as school and the time they have away. And there’s other younger players have been on our radar, they were used in the Pan Ams to show consistency in their performances, to give them an opportunity to be selected later in the year.”