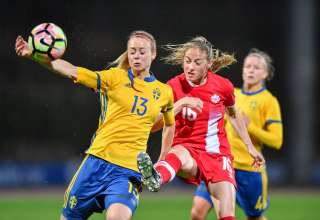 Janine Beckie is shocked when a game of handball breaks out. PHOTO: MIRKO KAPPES/CANADA SOCCER

Canada’s opening match of the Algarve Cup deserved a little more scrutiny than a non-televised national-team match would normally generate; that’s because the error-filled 3-1 loss to Sweden Wednesday marked the beginning of the Kenneth Heiner-Moller era.

Heiner-Moller was named the new head coach of the women’s national team in January, after John Herdman moved from the women’s program to replace Octavio Zambrano as the coach of the men’s team.

So, with a match against one of Europe’s top sides to open the Algarve Cup, we were fascinated to see how the Canadian women’s team would respond with the new boss at the helm. And, well, they presented Sweden with goals on silver platters.

The Swedes opened the scoring with three minutes left in the first half. A poor pass from Rebecca Quinn was picked off in Canadian territory by the Swedes; the ball was played to the left side, and Quinn dashed backed to a spot in front of goal to block the coming cross. She blocked it, all right — and basically left the ball sitting wonderfully in the penalty area for Mimmi Larsson to hammer home.

Canada equalized early in the second half. Nichelle Prince had a couple of chances to put the ball in, both were saved, but a final attempt glanced off Janine Beckie in front of the Swedish net and into the goal. Beckie didn’t know all that much about it, but a goal’s a goal.

The Swedes got the lead back in the 51st. The Swedes pressed the Canadian back line after a back pass from Kadeisha Buchanan to keeper Stephanie Labbe wasn’t delivered perfectly. Because Labbe had to chase the ball, the Swedes came at the Canadians in droves, taking away passing options. The ball was worked to fullback Allysha Chapman, but she had no passing options and tried to ease the danger by dribbling the ball up the middle of the field. She was surrounded by yellow jerseys as if they were a zombie horde, and within seconds Fridolina Rolfo had given the Swedes their lead back.

Prince got behind the Swedish defence and thought she’d equalized, but was flagged for offside.

Stina Blackstenius got the Swedish insurance goal thanks to a back-pass attempt from Shelina Zadorsky that fell far short of the keeper. Blackstenius received the gift and finished the chance.