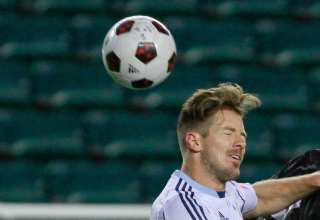 A Jordan Harvey header secured a 1-1 draw for the Vancouver Whitecaps on Saturday in their road match with the Portland Timbers at JELD-WEN Field.

The set piece goal, scored by Harvey in the 69th minute, cancelled out Ryan Johnson’s headed goal from a Diego Valeri 20 minutes earlier, and came at an opportune time as the ‘Caps found themselves outplayed and outpossessed for big chunks of the match — Portland finished the game with 57.9 per cent possession.

“We usually do set pieces right at the end [of training],” midfielder Matt Watson said on the post-match radio broadcast. “This week we did them a few more times, you know, and just really focused on the delivery. Runs and things like that. So I mean, just doing that little bit of extra work – we definitely haven’t scored too many from set pieces. We really wanted to take full advantage.

“During a game you always get corners and stuff like that. There’s no point in just putting it in there and hoping. We’ve got some structure to what we’re doing, and we’ve got a few different ones. We just put in one and it worked for us and that’s how it is sometimes.”

The match was a physical affair, with Canadian referee Silviu Petrescu handing out six cards and blowing the game to a halt 30 times due to fouls.

In one such physical encounter, Brad Rusin appeared to roll his ankle during a collision with Valeri 15 minutes in. Replays showed a nasty twist, and the player needed to be withdrawn. He was spotted following the game wearing a walking cast – with the club stating he had rolled his ankle.

If Rusin is injured, he’s the latest Whitecaps centre back to hit the treatment room, as Andy O’Brien and Jay DeMerit are currently out of action as they recover from hamstring and Achilles tendon problems, respectively.

“I fear the worst a little on that one,” head coach Martin Rennie said. “We’ll have to wait and see. I’m a little worried about it.”

Beyond the players mentioned above, designated player Kenny Miller (adductor), Darren Mattocks (knee) and Omar Salgado (foot) were all out due to injury. In addition, midfielders Jun Marques Davidson and Gershon Koffie missed out due to suspension – Davidson for his headbutt on Keon Daniel last weekend and Koffie for yellow card accumulation.

So given the context of playing on the road with many potential starters out of action, Rennie seemed happy to leave with a hard earned point.

“We have to focus on the guys that are available,” Rennie said. “It was a young squad of players,” Rennie said. “Maybe only [Lee Young Pyo] would be over the age of 30 I’d think. That’s a good thing and the guys played with a lot of confidence and a lot of heart.

“This is as tough place to come and we played well, so I’m really happy overall.”

The match also marked David Ousted’s debut in the Vancouver goal after signing from Danish side Randers FC in late June. He didn’t have much to deal with in terms of quality shots on goal, but looked confident in dealing with crosses.

The Whitecaps, now 9-7-6, prepare to host the San Jose Earthquakes at BC Place on Saturday.