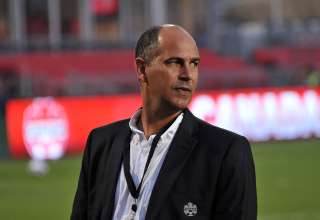 The Canadian Premier League’s silly season for coaching announcements continued Thursday, as Halifax Wanderers unveiled former Canadian national-team boss Stephen Hart as the man who will lead the club in its inaugural season.

Like Valour FC’s appointment of Rob Gale on Tuesday, this is a move that surprised no one and, really, was sort of expected. Just like Gale is synonymous with soccer in Manitoba, Hart has deep roots in Nova Scotia football. He’s managed both Canada and Trinidad and Tobago.

FC Edmonton will announce its new head coach next Tuesday.

Wanderers president Derek Martin admitted that his club has had a hard time keeping secrets (remember that, when the club launched, Hart was listed on the website as the club president until it was taken down and fixed). Fans knew about the name before it was announced, and fans all knew that Thursday would be the Hart announcement day.

During his time as Canadian national-team coach, I lost count of the times Hart lamented the number of players he called up who weren’t getting regular playing time, whether it be in Europe or in MLS or other leagues. And, then, he had to cope with having to call in so many unattached players — he was bringing players in, hoping that their performances for Canada would trigger a few phone calls to their agents.

“For all of us in the region who are passionate about the game and  have been involved, whether as players or coaches, we always felt that there was one piece of the puzzle missing,” Hart said Thursday, standing behind on a podium on the Wanderers’ ground.  “For a pathway to any aspiring players, that piece of the puzzle would have been having a professional team and having a professional league.”

And Hart, who will also serve as the club’s general manager, called for patience.

The club announced that, on July 28, a team of Atlantic Canadian all-stars being assembled by Hart will take on Fortuna Dusseldorf’s youth side at the Wanderers home ground. Martin said this is the first concrete proof of how the Wanderers will scour the Atlantic provinces for talent. The hope is that some players on that All-Star squad will earn invites to the first-ever Wanderers training camp.