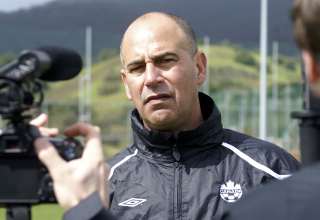 Hart said, at the senior level, there simply aren’t many players from which to choose.

“Not really, not anyone who has been playing consistently,” said Hart. In fact, the problem for Canada is getting enough players — as Hart pointed to the “scarce” player supply for the national team’s last few games. (Even though, to be fair, when Canada picks from both MLS and European-based players, which it doesn’t do for many friendlies, the supply is there.)

So, expect to see a Canadian squad this summer that’s very similar to the team we saw breeze through the preliminary round of World Cup qualifiers, beating out the Caribbean minnows on its way to this next round. After the U.S. friendly, Canada must then finish top-two in a group that includes Cuba, Honduras and Panama in order to make it to the hex.

All home games, including the U.S. friendly, will be staged at BMO Field.

But, even though Hart said players are in short supply, a few names of players who are currently outside of the national-team bubble came up in Thursday his conference call. He said he has been in contact with the agent for Canadian keeper Tomer Chencinski, who enjoyed a stellar season with VPS of the Finnish League in 2011, and got a clean sheet last weekend in his first Swedish top-flight start for Orebro SK. Hart said he has tried to watch Chencinski as much as possible, but it’s difficult to see all of the games.

And, Hart said he is tracking midfielder Issey Nakajima-Farran, who is with the Brisbane Roar of the Australian A-League.

Hart was with the Canadian U-23 team that fell in the semifinals of the CONCACAF Olympic qualifiers, and said he would invite some members of that team to the men’s senior camp, which is expected to open May 19, to give the European-based players (as in, those outside of Scandinavia) time to rest. MLS players will join as their clubs release them.

Hart said there were five or six players on the U-23 side that he thinks could be “interesting” with one caveat — “If they are playing for their clubs.”

But fans thinking that U-23 and FC Edmonton keeper Michal Misiewicz — who was Canada’s star of the tourney — is ready to move up should take Hart’s words into consideration.

“There are some things in his game that he needs to develop, and develop rapidly, if he wants to move to the next level.”

That doesn’t sound like a coach who thinks Misiewicz is ready, yet.

As for Bryce Alderson, the two-time U-17 Player of the Year and Vancouver Whitecap,a and one of the youngest members of the U-23 squad, Hart was far more enthusiastic.

“Bryce is very interesting, very different sort of Canadian player than we have had in the past.” He sees Alderson one day playing in the attacking midfield role, right behind the strikers.

Still, Hart said the U-23 players are “interesting,” not that he is sold on any.

“It’s hard to judge players on a three-team tournament, to be fair,” he said.

But, there is one 30-year-old player with whom Hart is looking forward to working with again. Olivier Occean has terrorized the German second division with 17 goals so far this season, but he hasn’t been as fearsome when playing for Canada. Hart said the May camp will give him Occean the luxury of time to acclimate to his teammates, which is key for a target man.

“He is doing very well, he is with a club (SpVgg Greuther Furth) that suits his abilities… This is probably the first time I can work with him over an extended period.”

And that means working on how the balls will be delivered to Occean from the wings and midfield. It means getting Occean into a situation where he and his fellow attackers develop some chemistry.

We know who won’t be there, though: Blackburn Rovers star (and it’s fair to call him star, now) Junior Hoilett hasn’t changed his tune. He’s focused on club football on the moment and won’t play for the national team at this time.

Meanwhile, Hart continues to have discussion with Jonathan de Guzman on what the Villarreal player needs to do to make himself eligible to play for Canada again. No timetable has been set.

Canada also plans to play a closed-door friendly before the June 3 encounter with the Americans. The Canadian Soccer Association is still working on that.