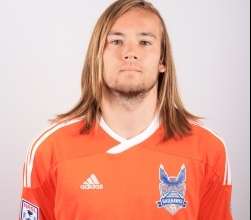 Canadian defender Paul Hamilton is looking forward to a massive week of matches.

On Wednesday, his Carolina RailHawks face Chivas USA in the fourth round of the U.S. Open Cup, a chance for the NASL to claim another MLS scalp. And, on Sunday, the RailHawks look to consolidate their hold on the NASL’s top spot in the spring season table. To do that, Carolina will need to beat FC Edmonton at Clarke Stadium.

And, for Hamilton, it’s the chance to go back home to Alberta — and revisit the city where he spent his first two NASL seasons. Hamilton, who was named to the NASL Best XI last season, was cut out of training camp in 2013.

Hamilton is more focused on playing in front of family, friends and the Edmonton Supporters Group than thinking about revenge being a dish that is best served cold.

“I’m looking forward to getting a chance to play back in Edmonton,” Hamilton said via e-mail. “I had a few great years there, still have many friends on the team and within the organization. My wife, and also many friends and family are going to be at the game. So yes, there is a greater excitement around this game for me. The supporters were always very supportive of me, and I would say I had a good relationship with them. So I would think I would maybe get a warm reception before the game, but when the first whistle blows, I would say I am fair game for some razzing.”

The reason Carolina is challenging for the spring season title — and the right to host the Soccer Bowl this autumn — is its improved defence. Everyone in NASL knows the RailHawks can score goals. No matter who the team puts up front, Carolina has never had an issue with scoring goals. But, last year, the RailHawks were at the bottom of the league in goals allowed. Now, Carolina has the second-best defensive record in the league, trailing only… FC Edmonton.

Hamilton is regularly paired with former Toronto FC first-round draft pick Julius James in the middle of the defence; and they’ve been a massive upgrade over a back line that was highlighted in 2012 by touted-but-very-raw U.S. prospect Gale Agbossoumonde — who, ironically, went to TFC in a lottery before the 2013 season.

“The adjustment has been good,” said Hamilton. “Everyone was very welcoming when I first got here, and still is to this day. The weather and facilities have been great, which makes playing here every day a treat. The supporters have been great. The RailHawks have a huge following down here and the stadium is always packed. My experience has been great so far.”

But Carolina’s lead over Atlanta and Minnesota is just a single point. The RailHawks lead the Eddies by five points. If the RailHawks were to lose in Edmonton, the standings would be juggled yet again.

“You know every game is important with the new set up of the league, but yes, for us being in first place, we want to stay there,” said Hamilton. We will be as focused as we have for any game this year.”

But, before the trip to Alberta, Hamilton and the RailHawks will try to eliminate their second consecutive Los Angeles-based MLS opponent from the U.S. Open Cup. Two weeks ago, the RailHawks ousted the Los Angeles Galaxy with a 2-0 win. Coming off a head injury, Hamilton came into that game as a sub to help protect the lead. He said the atmosphere at WakeMed Park was fantastic; and he thinks the RailHawks are primed for a Cup run.

“The win against the Galaxy was huge for the club. You get a great feeling winning games, but there is an extra-good feeling when you win a cup game. There was a record number of fans out for the game, which is always great to see. I think we have a great chance as a team to go far in the U.S. Open Cup.”

And, as is the case when you compare the best teams in the second division with the worst teams in the first division in any country, you could argue that the RailHawks actually have a more talented starting XI than Chivas USA. There is a large distance between the likes of the Montreal Impact, Real Salt Lake and FC Dallas from NASL clubs, but the teams at the bottom of MLS — like Chivas, D.C. United and, ahem, Toronto FC — would be hard-pressed to go to Cary, N.C. and get wins, even when using their “A” lineups.