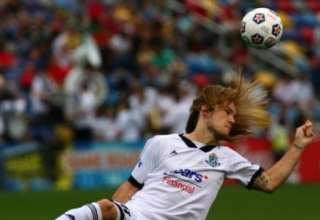 Striker Kyle Porter isn’t ready for a return to the FC Edmonton lineup ahead of Sunday’s home date with the San Antonio Scorpions, but there were sighs of relief around the Eddies’ camp today as it looks like central defender Paul Hamilton and forward Matt Lam could be ready to go. But it hasn’t been determined if those players could start or not.

Hamilton, the general of the Eddies’ backline, left at halftime of last Saturday’s 2-0 loss to San Antonio with a bruised hip. But the club announced Wednesday that Hamilton is probable for Sunday’s match — as is Lam, who is also nursing a hip injury. But, there aren’t guarantees yet that either player can handle 90 minutes with days to go before the match.

But Porter and Michael Cox are nursing bad ankles. FCE officials said Porter could be used “in an emergency,” but, less than two months into the NASL season, there really would be no point in risking Porter’s long-term health by having him face San Antonio, is there?

FCE also reported that defender Fabien Vorbe, who was initially reported to have broken his nose in the San Antonio match, has only a contusion on his nose — it isn’t fractured. He is good to go Sunday, as is fullback Fabrice Lassonde.

In fact, the defence corps has been thinned out so much by injuries, that Andre Duberry was recalled from the reserve side and was training with the first team on Wednesday.

Midfielder Serisay Barthelemy, who injured his calf against the Vancouver Whitecaps in the Amway Canadian Championship, will likely return to training next week.

But, remember that we’ll have to wait and see what kind of lineup Scorpions coach Tim Hankinson will utilize on Sunday. The Scorpions have a U.S. Open Cup third-round match next Tuesday in San Antonio against the MLS’ Houston Dynamo. With the game against MLS opposition being 48 hours away from the match in Edmonton, it will be interesting to see who Hankinson chooses to rest against the Eddies. For NASL sides, Cup games against MLS opposition have special meaning — and the Scorpions’ match is made all the more interesting by the fact they are facing another Texas side. So, if Hankinson chooses to rest players for the Edmonton match, you could hardly blame him.