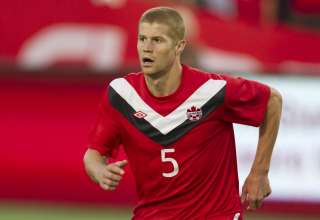 Andrew Hainault may not be the most popular person with the Canadian national team’s coaching staff, but the central defender has turned into the unlikeliest of goal scoring heroes for the MLS Cup-bound Houston Dynamo.

The Dynamo will be heavy underdogs in two weeks time, when it take on the Supporters’ Shield winner Los Angeles Galaxy in the final. In a gripping Western final, Canadian Will Johnson and Real Salt Lake couldn’t survive a second-half surge from the home side — as the Galaxy took it 3-1 in a game that could easily have finished 5-4.

Hainault, who scored the opening goal of the Dynamo’s aggregate-series playoff win over Philadelphia, opened the scoring Sunday in Kansas City after he found the ball in the box after a free kick led to a goalmouth scramble. Honduran Carlos Costly scored a late insurance goal.

And, Hainault, who dislocated Teal Bunbury’s with a preseason challenge, put another dagger in the heart of Canadian soccer’s Public Enemy No. 1. Bunbury, who scored twice in SKC’s Eastern Conference Semifinal run, became Canada’s top MLS heel when he chose to play for the United States over Canada, which he represented at youth-team levels.

Bunbury will sit out MLS Cup while Hainault will start.

And he won’t worry about any sort of conflict with the national team. Hainault was pretty well an automatic call-up for national coach Stephen Hart — but he declined an invite in October so he could focus all of his energy on helping his club make the playoffs. This time around, he wasn’t asked.

“It’s not our call, it’s his call,” said Canadian assistant coach Tony Fonseca earlier this week about why Hainault was left off the team this time around.

Hainault and co. will be massive underdogs, and it doesn’t help that MVP candidate Brad Davis had to leave the Eastern final and was later seen on crutches. But there is one ray of hope; Houston’s strength through the playoffs has been on set pieces — and the Galaxy’s usually reliable defence looked very vulnerable on free kicks and corners throughout the Western final.

Really, the Galaxy should have been down 2-0 in the first 10 minutes. Off a corner kick, RSL defender Robbie Russell had a point-blank chance that he fired right at Galaxy keeper Josh Saunders. Then, off a perfectly struck Javier Morales free kick, an unmarked Chris Schuler, playing instead of regular centre back Nat Borchers, headed wide when it would have been easier to score.

But the third time was a charm for RSL; a minute after a Landon Donovan opened the scoring, an unmarked Jamison Olave, who passed a late fitness test to get the start, headed a corner kick back across goal for an unmarked Alvaro Saborio to head home.

Both Galaxy striker Robbie Keane and RSL’s Kyle Beckerman both smacked shots off the post before the end of the first half.

With both teams having games in midweek, then having to play the final on Sunday, it probably shouldn’t have been a shock that the game was so loose, with so much space in midfield. When teams get tired, the first thing to go is the defensive shape.

And, if anything, the second half was more chaotic than the first. Twelve minutes after restart, Mike Magee gave the Galaxy the lead for good when he headed home a perfect David Beckham cross. But, a minute later, Fabian Espindola came oh so close to drawing RSL level again — but his strike smacked the underside of the bar and stayed out.

Robbie Keane gave the Galaxy a two-goal cushion after he turned Olave inside-out and then found the inside of the far post with a low drive.

RSL had many chances to get the deficit back to one goal, but Saunders made great saves on Luis Gil and Morales, and Espindola missed the goal after he’d got behind the defence.

Houston can only hope Los Angeles is as loose again two weeks from now. But, again, this display of sloppy defending was likely the product of a ridiculous playoff schedule that saw the conference finals contested just days after the semifinals were completed. With the addition of a preliminary playoff round and an international break, the games were shoehorned together.

We will see how the MLS playoff schedule breaks down next season, when NBC and its family of sports channels takes over as the league’s American broadcast partner. We know that the Sunday prime time MLS Cup final is likely done, as you can’t imagine that NBC would park the marquee night of its newest property on one of its smaller stations — and in direct competition with its biggest regular sports broadcast, Sunday Night Football.