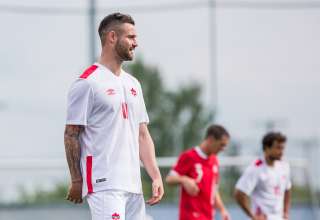 The announcement took all of a couple minutes with no questions from the media during the streamed portion of the event.

Haber left Dundee of the Scottish Premier League by mutual consent so he could sign in his home province of British Columbia. He has made 27 appearances for the Canadian national side and has scored three goals.

Rob Friend, sports director for Pacific FC, said that when he and coach Michael Silberbauer discussed the need for a target man, it was Haber’s name that jumped to the forefront. A B.C. native, a former Whitecap, with nearly a decade of experience in Europe.

Haber’s presence suggests that Silberbauer will try a more direct style of football than many of the other CanPL coaches are talking about, but he has also vowed not to be tactically rigid, that he will learn from what his players can do and build a style to suit those talents.

“He will give us some versatility in attack,” Silberbauer said, noting that Haber will not only be good in creating chances for himself, but can work the ball with his feet and create for others.

“He’s still at an age where he has some of his best years in front of him,” said Silberbauer.

“Joining Pacific Football Club is not just an opportunity to come back to where I grew up, but also a chance to be part of history,” Haber said in a release issued before the unveiling. “I’m excited to be back on the West Coast, it is an important part of who I am.”