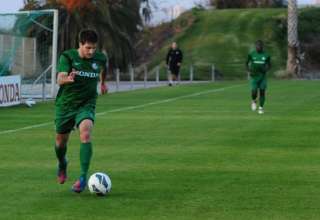 Canadian forward Daniel Haber has a hell of a strike rate.

He’s averaging a goal every 28 minutes for Maccabi Haifa.

Unfortunately, that’s more a reflection of his playing time in Israel than it is about his insane nose for goal. Haber only has one goal this season, and it came over the weekend in a 2-1 loss to Ironi Ramat Hasharon, in a game that held little meaning for Haifa.

In January, Haber, a Torontonian, decided to forego his final year of NCAA eligibility and made the jump to Haifa. Haber led the Ivy League in scoring, and was the key piece in the Cornell University attack. But, getting the opportunity to play in the Promised Land, for a club that had a real shot at European football, was an intoxicating combination for Haber.

But, it wasn’t until this past weekend till he actually got into an Israeli League match. And it came long after rivals Maccabi Tel Aviv wrapped up the title. MTA features Canadian keeper Tomer Chencinski, who may get more playing time next season as Nigerian keeper and starter Victor Enyeama was in Israel on loan and may not be back for 2013-14.

Haber came on as a 62nd minute sub in a game that Haifa was already down 2-0. He scored three minutes after he came in. But it’s taken so long for Haber to get a shot, you have to wonder if a goal is just a consolation. Now, there are just two games left in the season, and with MTA already celebrating its league title, it will be interesting to see if the Canadian gets more time on the pitch with Haifa.

Haber was reported to be on a two-and-a-half-year deal with Haifa. But, in the cases of many young recruits, there are team options loaded into contracts or, of course, loan possibilities.