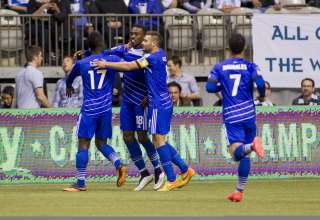 The Vancouver Whitecaps were finally able to break down FC Edmonton’s defence late in the match, but a 1-1 draw at BC Place was still an awfully big result for the visitors.

The Eddies will now head back to the Alberta capital knowing that they have a real chance to knock off the Whitecaps when they play the second leg of their Amway Canadian Championship semifinal next Wednesday. The Eddies have not lost a game at Clarke Stadium since last July. And, when the played MLS opposition at Clarke last season — the Montreal Impact — the Eddies won.

And the Eddies have a road goal.

“What a performance by these guys tonight,” said FC Edmonton coach Colin Miller. “It speaks to the culture that we’re trying to build here. We gave up some very poor goals to the best team in NASL on Sunday. But we came into this game not looking to draw; we thought we could win the game. We knew that, playing against the best team in the MLS Western Conference, that we couldn’t have one single player out there fail tonight. And we didn’t have any failures.”

The Eddies sat back and absorbed pressure and hit back on the counter, with lone striker Tomi Ameobi doing tireless work holding up ball after ball. He often won the first ball, despite being outnumbered two or three to one.

Earlier this year, Miller said that he felt Ameobi could play in a much bigger league than NASL — and that he could be the best striker in NASL — if he could find consistency.

Ameobi has been nothing but dangerous over the last month.

“I stand by what I said,” Miller said over the phone, voice hoarse from two hours of yelling at BC Place. “He really is a joy to work with, from the effort he puts in to his humility. He has a great willingness to learn and improve himself, and he did very well for us again tonight.”

Without injured captain Albert Watson, the back line held for most of the game. Yes, the Whitecaps started a young, experimental lineup, choosing to leave many of their big guns in their street clothes. But, the Eddies can only be judged based on the team that the Whitecaps put in front of them.

Miller said that Watson could have played Wednesday “in a pinch,” but that he wanted to give the captain a few more days off before Sunday’s league game at home to the Scorpions.

The Eddies have been poor starters for most of the year; in three NASL games and one previous ACC match, they’ve given up goals inside the 90-second mark. But the Eddies turned the table, stunning the BC Place crowd with a fourth minute goal. Tomi Ameobi picked the pocket of Whitecaps’ holding midfielder Gershon Koffie, who lingered on the ball. Ameobi nicked the ball, went in alone, and cooly slotted a low shot inside the post.

And, while the Whitecaps had some decent spells of possession as the first half went on, they did little to trouble Eddies’ keeper Matt Van Oekel. There were a couple of chances scuffed wide. But, for the most part, forwards Darren Mattocks and Erik Hurtado couldn’t get chances because passes were being cut out. And the Whitecaps struggled to get the ball behind the Eddies’ fullbacks.

The Whitecaps had more chances in the second half, though. But Eddies keeper Matt Van Oekel made two big saves, first swatting away a Hurtado attempt and then coming off the line to block a shot from Mattocks.

In the 65th minute, Mattocks nodded a ball into the Eddies penalty area for Hurtado to run on to — but Hurtado, with only Van Oekel to beat, blasted the ball wide.

Kekuta Manneh and Robert Earnshaw were brought in to bolster the Whitecaps’ attack, and the Eddies had to beat back attack after attack. Kareem Moses and Mallan Roberts did well to win a lot of balls pushed to the middle of the area. Fullback Eddie Edward had his best game of the season, a dominant force on the right side.

But, playing on the unforgiving BC Place turf — and not rotating the squad from Sunday’s game — finally took its toll on the Eddies. And, in the 86th minute, left back Johann Smith — playing because of the injuries to Watson and left back Allan Zebie — couldn’t get a bouncing ball out of the penalty area. The ball came to Koffie, who somewhat atoned for his earlier error by finishing the chance.

(“Somewhat” and not “fully” as road goals loom larger than goals scored at home.)

Last year, the Eddies went out at the semifinal stage to the Impact thanks to a 96th-minute penalty in the second leg. Now, they’ve gone to Vancouver and got a 1-1 draw. Say what you will about MLS teams resting players; the NASL team has made a solid account of itself.

“It doesn’t matter what players were out there in Whitecaps shirts tonight,” said Miller. “They are excellent players. They are one of the best teams in MLS.”

And, there’s no doubt that the Eddies would love nothing more than another shot at the Impact, who qualified for the final thanks to Dominic Oduro’s late headed goal in Toronto earlier Wednesday night.

That game, a 3-2 “win” for TFC that saw the Reds lose on the away-goals rule, was another example of great Cup theatre, as a single flick from Oduro’s head cancelled out a furious second-half rally from the Reds, spurred by Designated Players Sebastian Giovinco and Jozy Altidore.

If anything, these semifinal ties, added to some compelling ties in 2014, are proof that the Canadian Championship is important, that it needs to grow. Because, let’s face it — in terms of sheer entertainment, they’ve offered the best games we’ve seen in Canada over the last couple of years.