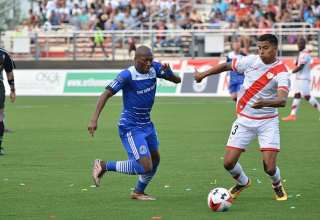 His 93rd-minute, 25-yard drive came off the underside of the bar and across the goal line to give FC Edmonton a 1-1 draw at Rayo OKC.

It was a wonder goal that got FC Edmonton a point out of a game that was, for the most part, a struggle.

“It was not a good performance from us in the first half, it was better in the second half,” said FCE coach Colin Miller. “We had so many players not at pace today, but, at the end of the day, nobody could begrudge us a point.”

The game was part of the CBS Sports Network, ahem, “national” package (the network isn’t available in Edmonton or in many other Canadian markets). So the only place in the city that could legally show the game was the team’s official match-night party. And, in Oklahoma City, the pre-game “O Canada” was butchered so badly, that Miller admitted that “it got the team’s backs up.” These were reminders on just how much Edmonton is the ugly stepsister in the league.

With midlfied anchor Nik Ledgerwood suspended for Saturday’s NASL fall-season opener at Rayo OKC, the Eddies struggled in the middle of the park, with Rayo OKC keying on teenager Shamit Shome. The Eddies continued to give the ball away throughout the first half.

With Ritchie Jones’s injury forcing him to leave the club, and Mallan Roberts and Eddie Edward now with the Ottawa Fury, the Eddies’ roster is short at the moment. The team brought just 15 players to Oklahoma — and it was nearly 100 Fahrenheit when the team arrived at the stadium Saturday.

There were warning signs early in the match. After FCE’s Daryl Fordyce was stripped of the ball, Rayo OKC’s Billy Forbes forced a fingertip save from keeper Matt VanOekel.

But the giveaways finally caught up to the Eddies in the 33rd. After yet another ball was coughed up in the middle of the park — and then a rather unfortunate carom off the leg of right back Allan Zebie — Rayo OKC’s Jarad van Schaik got possession down the left wing. He slid the ball across the box, where striker Robbie Findley just beat Eddies’ centre back Albert Watson to the ball.

The Eddies carved out one decent chance in the first half; a Sainey Nyassi, ahem, “shot” (it was clearly intended to be a cross) looped over the head of Edmonton-born Portuguese international Daniel Fernandes in the Rayo OKC goal and off the top of the bar.

Eddies coach Colin Miller yanked midfielder Dustin Corea with 10 minutes left in the first half, putting on Gustavo in his place. Miller said that Corea had an injury problem,

Nyassi, VanOekel and Forbes got involved in a nasty three-way collision late in the first half. Nyassi took VanOekel’s knee to the head, and the keeper went flying and landed awkwardly. Really, it looked liked something out of Australian Rules Football. But, though Nyassi was down for a couple of minutes, he stayed in the game.

The second half began with Rayo OKC still holding the momentum. Off a free kick, Findley cushioned the ball in the box for Richie Menjivar, forcing VanOekel into a good, sprawling stop.

In the 64th, Findley was alone coming down the right channel, and VanOekel did well to block the shot.

Those VanOekel saves would loom large, keeping the Eddies in the game for Gustavo’s grand-finale finish.

Miller said he expects to bring in one or two new faces ahead of next weekend’s game at home to the Fort Lauderdale Strikers. And he said a decision would be made early this week on defender Shawn Nicklaw; the Guam international has been on trial with the Eddies for the last week.

“We will freshen up the squad,” he said. “As for tonight’s game, you can question the performance, but not the character of this team.”