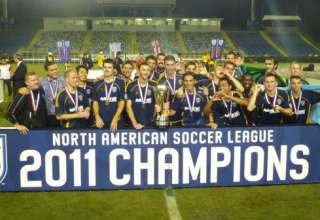 For anyone not cheering for the NSC Minnesota Stars to take the Soccer Bowl, it was an ugly spectacle.

But, for the Stars and their fans, the NASL championship was worth it. Protecting a 3-1 lead after the first leg of the league championship, the Stars travelled to south Florida to take on the Fort Lauderdale Strikers, and parked 10 men behind the ball for 90 minutes-plus of mind-numbingly dull 0-0, ahem, “action.”

The result gives Minnesota, who finished just a point ahead of the Montreal Impact for the sixth and final playoff in the eight-team NASL, the Soccer Bowl. It wraps up an improbable playoff run which saw it beat the No. 1 seed and runaway regular-season champion Carolina RailHawks in the semifinal.

The Strikers had possession of the ball in the Minnesota half for most of the game, but created precious little in front of the Stars’ goal. For too much of the game, the Strikers tried to cross the ball into the box, a strange move considering that the size of Minnesota’s defenders gave them a marked advantage over the home team and that winning balls in the air is arguably the weakest part of the Strikers’ game.

The Strikers’ strength is being able to move the ball quickly through the midfield; but with Minnesota clogging up the park, Fort Lauderdale was left trying to hammer balls up top. At one point, an outnumbered Abe Thompson, badly outnumbered by Stars in the penalty area, flopped to the ground as he couldn’t win yet another hopeless cross. Trying to get an undeserved penalty was the best he could do.

Really, the closest either side came to scoring a goal was the Stars’ Luke Mulholland, who got to the top of the Strikers’ penalty area on the break — as the Strikers pressed late in the second half. But Mulholland’s shot was skied well over the goal.

While it was a major triumph for the Stars, it wasn’t a great night for NASL. For the first time — unless you count French-language Montreal Impact broadcasts shown across Canada on Radio-Canada — an NASL game was broadcast coast-to-coast. GolTV and GolTV Canada showed the game on tape delay. And, fans were, ahem, treated to a Minnesota team that was satisfied to play with as many men behind the ball as possible in order to protect a two-goal lead.

On the live stream of the game, the stands at Lockhart Stadium looked mostly empty. And, while it was raining in south Florida, this is the danger of a two-legged final rather than a single-game championship like an MLS Cup, World Cup final or FA Cup. Minnesota opened up a two-goal lead after the first leg, and that made it awfully tough for the Strikers to sell tickets for the second game.

Of all the things NASL will need to look at changing for year two — and sources have told The 11 that division-2 sanctioning from the United States Soccer Federation is all but a done deal — the championship format needs to be addressed. If games are to continue on GolTV and GolTV Canada next season, if the league wants to attract more casual fans, it needs the championship to be a one-game affair.