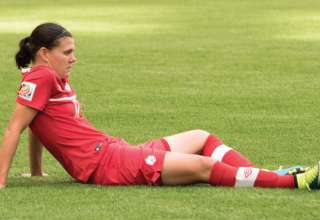 Christine Sinclair, dejected after the loss to England.

Flattered by the success of the Olympic bronze medal in 2012, the Canadian women’s national team may have been as glittery as fool’s gold to casual sports fans. But, really, with the team’s offensive issues and lack of stars in the primes of their careers, was elimination at the quarter-final pretty much inevitable?

Where did it all go wrong? Or was reaching the quarter-finals a good showing for Canada at the 2015 Women’s World Cup?

The answer you get will depend with whom you’re speaking.

nada’s women’s side as one of the elite teams internationally, largely based on the bronze medal achieved at the London 2012 Olympic Games, it doesn’t entirely square with the general sense from those who follow the game more closely.

While the performances put on by Canada’s team in London were gutsy, there is a general feeling that coach John Herdman’s team punched above its weight. Ask most players on that side how they feel the bronze-medal game went and the answer will be the same – the team weathered the storm against a technically superior French side which dominated them. But, Canada emerged victorious.

There’s no shame in that, but, when it comes to the late stages in tournaments, there is a significant gap between where Canada is now and the top, top teams in women’s soccer.

With a rank of eighth in the world, that’s nothing to sniff at. But anybody who watched this group of players in this tournament will have spotted some serious deficiencies, and those problems ultimately led to an exit in the quarter-finals against an England side which was solid but unspectacular.

Canada’s most glaring issue in this tournament was a clear creative deficit. Five games played, four goals. No matches with more than a goal. You can have the best defence in the world, but with production like that, you allow fortune to play too big a role.

And indeed it came down to essentially one moment — a fateful slip by centre back Lauren Sesselmann. On the play, her foot appeared to catch in the artificial turf at BC Place as she received a back pass from a teammate. She fell, and English forward Jodie Taylor pounced, scoring a well-taken goal after eluding a chasing Allysha Chapman, who also slipped on the surface.

Then moments later, England scored what would be the game winner through a header from Lucy Bronze. Herdman later said he didn’t want the diminutive Chapman marking her on a set piece, and said he tried in vain to shout for a taller player to match up against Bronze.

Christine Sinclair’s only goal from open play in the tournament gave Canada hope, but ultimately the host country’s meek offence huffed and puffed to little avail, and so we were left wondering what might have been.

Immediately following the loss, a reporter asked Herdman if the result displayed some deficiencies.

“This is where we’re at,” said Herdman. “This is a team that’s trying to play football more than any other Canadian team has. I made a commitment to this group that we keep moving the team forward with a style of play and an approach, and with that, as we transition players, our youth are only going to be better, because they’re coming through our system. They’re going to be building a clear understanding of how we  play, and the style that we want to play.

“I don’t think the plan was written, you know, to have a team that peaks in 10 years for a Women’s World Cup in 2015. That plan was never written. We had a World Cup here in 2015 without a consideration that the cycle of players might not be peaking. But we did it. Our country got behind us. They’ve had a great time, great experience, and there’s going to be a new generation of women —players, coaches, that’ll be motivated by what they’ve seen from our

“Where we actually lined up to win this event? Well that’s a 10- year plan. Was that 10 -year plan written? No, not when two coaches had been [here] before us. That’s a reality, but we’re in a great place as a team. You can see the youth is just on the horizon.”

That youth on the horizon is highlighted by the likes of 19-year-old Kadeisha Buchanan, who claimed the tournament’s Young Player Award. She was a rock in the heart of defence and probably Canada’s most consistent player during the competition.

Midfielder Ashley Lawrence, 20, earned a starting spot and acquitted herself well, and 17-year-old Jessie Fleming is another player poised to star down the line in that position.

“When you look at those youngsters, I think there’s a new DNA coming through, there’s a new breed of footballer that we’re bringing through,” said Herdman. “It was a transitional team. We knew that. But, we had no excuse. We came here to win a World Cup because it was our home soil.”

Regardless of how the team is perceived, it’s fair to say this group of Canadian women has inspired thousands of young girls across the nation, highlighted by that bronze medal in London. For some of them, the journey is over, or soon will be. For others, like Buchanan, Lawrence and Fleming, the road is just beginning.

But, for Canada to have success, that expanded pipeline of talented youngsters which is surely out there must be found, focused on, and supported if this country is to become a true contender for a World Cup.

A big playing populations isn’t essential – just a strong developmental system. Japan’s system, which has only 40,000 girls registered, is testament to that.

But before we even get to that stage, players need to fall in love with the game, and this showing will have lit that flame for many girls to pick up the sport.

“I’m proud of [the team],” Sinclair said following her team’s exit. “You look around the stadium tonight and there’s 50-odd thousand people wearing Canada jerseys. Young kids now dream of representing Canada, and we did that. This one stings, but in the grand scheme of things, this tournament was a huge success.”