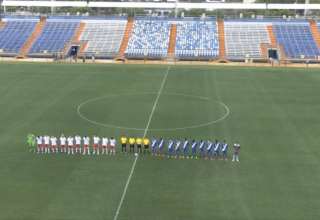 The pregame festivities at Lockhart Stadium

The corner flags were straining. The palm trees in the background were bending.

It was a perfectly windy day in Fort Lauderdale, as the Canadian national team was able to nurse a one-goal lead after an early Marcus Haber goal — and came out with a 1-0 win over Guatemala.

With the wind at their backs, Canada pinned the Guatemalans deep in their own half through the first 20 minutes of the game. Clearances from defenders and Guatemalan goal kicks were knocked down by the wind.

The Canadians got their breakthrough when a Kyle Bekker corner kick was headed into the goal by Marcus Haber. It had the feel of a training-ground goal, as not one Guatemalan defender looked to move after Bekker delivered his swerving ball into the penalty area. Haber was absolutely unchallenged when he leapt to the meet the ball.

A couple of minutes later, midfield veteran Julian de Guzman lashed a volley from outside the box just wide of goal.

While Canada didn’t create many golden chances in the rest of the first half, the real test came in the second half. To play into the teeth of a strong wind, you need to keep possession by playing the ball on the ground.

But, even with the wind in their faces, Haber was able to get behind the Guatemalan back line and into the box before being pulled down from behind. But the referee waved off the penalty appeals; the Guatemalans pushed the ball up the pitch and midfielder Stefano Cincotta’s volley smacked the Canadian goalpost at the end of their sequence.

The wind was so severe that, on their corner kicks, the Guatemalans opted for low drives into the area or playing the ball short. They didn’t want to risk getting the ball into the air and having it take a 90-degree turn over the end line.

A last-gasp effort from Marco Pappa, twisting in the wind, came off the bar. And then an injury-time 35-yard effort from Jose Contreras carried in the wind, and forced Canadian keeper Milan Borjan to leap and tip the ball over the crossbar.

While Guatemala had some late, desperate wind-blown chances, Canada did what you need to do when you get the wind at your back in the first half. With fresh legs, you go out hard early and try to press that advantage, and hope to tire the opposition out enough that they don’t have the same kind of bite in their game when they get the wind in the second 45. Canada came out early, then nursed it home.