May 18, 2022
9 New Articles
Home Global Game Rest of the World Goals from Sinclair, Matheson give Canada the win over NZ 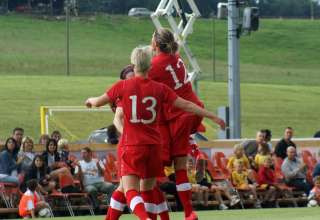 >The Canadian national women’s team gave coach John Herdman the chance to chalk up a win against his old team.

An audacious first-half chip from Diana Matheson and a cool second-half finish from Christine Sinclair gave Canada a 2-0 win over New Zealand in the opening match of the Matchworld Women’s World Cup, a Swiss tournament that acts as a warmup for the London Olympics. The goal was Sinclair’s 16th of the season, tying a Canadian record.

Herdman coached the New Zealand side before taking the Canada job in 2011.

For New Zealand, it was a chance to test its mettle against a higher-ranked team. And, like Canada is using its pre-Olympic opponents as preparation for its opponents in the upcoming group stage, New Zealand opens the Olympic tourney against the hosts — and it felt that Canada plays a similar game to the Brits.

“They (Canada) are peaking for the Olympics and exactly the sort of test we need this close to London,” NZ coach Tony Readings was quoted before the match on his football federation’s official site.

“They will also be similar to Great Britain in many respects so they will be a good dress rehearsal for our opening game in Cardiff. There’s also a chance we could meet again in the knockout stages so it’ll be a useful sighter for us.”

The field, set in lush, green Swiss hills, was dominated by the Canadian side, but it was the Ferns who had the first good chance of the game, when Amber Hearn — who plays club football in Germany — was first to get to a low corner kick and hooked and effort off the woodwork behind Canadian keeper Karina LeBlanc.

But, at the half-hour mark, Canada was rewarded for its domination in possession. Matheson made a foray to the top of the New Zealand penalty area and, with three defenders to beat, she chose to check up and delivered a perfect chip that floated over the keeper and into the back of the net.

Sinclair then rocketed an effort that smashed off the crossbar before the halftime break.

Sinclair would get on the scoresheet early into the second half, slotting home after she was played through the New Zealand backline thanks to a perfect through ball from Sophie Schmidt.

New Zealand would get one last chance, but LeBlanc was able to leap and touch Annalie Longo’s 20-yard effort onto the bar.

If there was any concern, it was that, late in the game, LeBlanc was no longer taking her own goal kicks, and looked to be struggling with playing balls with her feet.