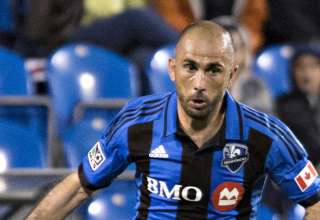 A good compromise leaves everybody mad, as the cliché goes, and the same is true of a draw in football. It seemed as if the wild 3-3 draw between Toronto FC and the Montreal Impact at BMO Field required one more final bit of brilliance (or foolishness, given some of the match’s previous scoring plays) to properly conclude the evening’s action, but instead both sides were left with one point each and numerous regrets.

It took a mere 24 seconds for the Impact to open the scoring, as Andres Romero was the lucky recipient of some bumbling play from the Reds. A long pass downfield was taken by defender Darren O’Dea but headed backwards into Romero’s stride. Goalkeeper Joe Bendik rushed way out of his net to try and cut the play off but Romero evaded him and then was easily able to fire the ball past Gale Agbossoumonde’s futile goal-mouth clearance attempt.

“Obviously my pregame talk worked well,” TFC head coach Ryan Nelsen joked. “Thirty seconds in, the guys are really up for it and it’s pretty horrendous. It’s out of character for Darren, he doesn’t make those mistakes. The poor guy is gutted, he felt really bad.”

Given that the last Impact/TFC tilt was a 6-0 result for the French side in Voyageurs’ Cup play, it seemed like the late-arriving crowd at BMO Field had already missed the game’s deciding goal. But instead it was the Reds who carried the momentum, equalizing just five minutes later when Bobby Convey passed to Jeremy Brockie inside the box, and the forward simply stepped to his left to evade two defenders and then roofed a shot for his first goal in a TFC jersey.

Brockie’s goal opened what was probably Toronto’s best 20 minutes of soccer of the season, a stretch that left the Impact flat-footed and looking like it was the struggling two-win club rather than the Eastern Conference leader. Centre back Steven Caldwell headed in a Brockie cross to put TFC ahead in the 21st minute and then O’Dea redeemed his earlier error by cutting through four Impact players and scoring a tremendous goal.

The goals were also Caldwell’s and O’Dea’s first for the Reds, and once veteran defenders start finding the back of the net, it’s usually a bad omen for the conceding team. It was TFC’s first three-goal performance in a league game in almost a full year, since a 3-2 win over Vancouver Whitecaps FC on July 11, 2012.

“The way we played, we were very timid. We were trying to play out of the back and they were pressing us. They were just winning second balls, being more aggressive than we were,” said interim Impact head coach Mauro Biello, filling in following Marco Schallibaum’s controversial one-match suspension. “I said, if we get one back we are going to be back in this game. Credit to the guys, they came back out, they came out strong and they were able to get that second goal.”

That second goal came in the 69th minute and the Impact’s third came just moments afterwards. A long pass into the TFC end in the 69th minute saw Caldwell and Ryan Richter seemingly get crossed up, leaving Hassoun Camara there to collect the ball and fire it into the net.

Less than a minute later, it was more sloppy clearing from Richter on the left side that allowed Felipe Martins to take the ball and snake a pass into the box to Marco Di Vaio. The striker easily converted the chance with his league-leading 11th goal of the season.

It wasn’t lost on Nelsen that his team’s three goals were all quality scores while the Impact were able to capitalize on “naive mistakes” from the Reds defense.

“They were really soft kind of goals,” Nelsen said. “We handed it a wee bit to them. On Toronto FC under my watch, we take pride in not conceding many goals, so that hurts.

“Generally a team has to really work hard to score goals against us… Three goals, I’m extremely disappointed about. We haven’t conceded three all season and that hurts me horrendously. But that’s the best team in the East.”

If coming back from a 3-1 deficit wasn’t enough, Montreal nearly went ahead in the 78th minute but Bendik stopped Di Vaio and Daniele Paponi on consecutive shots, then Di Vaio couldn’t corral a dangerous rebound.

Both sides saw chances for the go-ahead goal in the closing minutes. Brockie put a dangerous shot off the left post in the 89th minute, while the Impact nearly capitalized on a questionable Caldwell handball call that gave Di Vaio a free kick from just beyond the arc.

Di Vaio’s shot went wide, however, saving the Reds from a bit of injustice and leaving them instead just frustrated over another missed opportunity.

“It’s tough to take. We can’t keep saying ‘we’ve been the better team’ in a lot of games this year and we haven’t won,” O’Dea said. “It’d be easier to take if it was like last year and we were just a poor side… The team we have now and the players we continue to bring in are good enough and we’ve proven we’re a match for any team in the league. We’ve bettered a lot of teams in performances but performances don’t mean anything at the end of the day.”

While TFC was again left wondering what might have been, the Impact suddenly face a raft of questions about its leaky defensive play. Montreal has conceded at least two goals in seven of its last nine games and have now allowed seven goals over the last two matches alone, following Saturday’s 4-3 loss to the Colorado Rapids.

“I think we need to look at what we can do better because we conceded seven in the last two games and that’s not going to get the job done,” Davy Arnaud said. “It’s a collective effort, it’s a group effort. We scored six in the last two and that should be good enough for more than just one point. We’ll get better. We need to get back to what we’re about and not concede as many goals.”

Alessandro Nesta looked particularly out of sorts against Toronto’s attackers, leading one to question whether the 37-year-old should’ve been playing his second 90-minute match in a five-day span. Montreal only made one lineup change from Saturday, inserting Arnaud back into the starting lineup in place of Andrea Pisanu. It was Arnaud’s first start since suffering a concussion on April 27.

Toronto, meanwhile, was forced to shuffle its lineup given the absence of four players (Jonathan Osorio, Ashtone Morgan, Doneil Henry and Kyle Bekker) to international duty in Canada’s Gold Cup camp. Reggie Lambe and Agbossoumonde returned to the starting XI while Luis Silva started at striker in place of Danny Koevermans and Darel Russell replaced Jeremy Hall in the midfield.

The end result was a TFC Starting XI that had combined for just one league goal this season, yet ironically, this was the combination that delivered the team’s highest-scoring performance of the season.