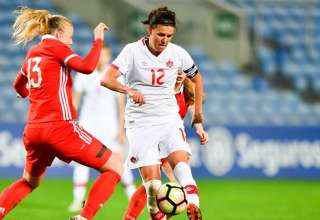 Today Portugal was scene of glorious first-ever victory for director of women’s national team, Kenneth Heiler-Moller, as our Canadians dispatched the Russians 1-0. The score did not reflect the grand superiority of Canadian attacking, as the thousands upon thousands who watched on the crystal-clear Russian stream were thrilled by yet another goal for the great Christine Sinclair.

Sinclair! Say her name as you look to the sky! As jet fighters scream overhead!

There are rumours abounding that Russian stream of Friday’s glorious Algarve Cup match was not functioning at an optimal level. That some did not see game at all. These are lies meant to distract you from great truth.

Sinclair, with goal scored from penalty strike, now has 170 such thunderbolts. She is now but 14 behind Great Satan Abby Wambach for the all-time lead in women’s international football.

The captain of fine Russian opponents, Anna Zozhnikova, was dismissed from match for her challenge on Canadian rising star Jordyn Huitema, and Sinclair, the great Sinclair, the mighty Sinclair, stepped to the spot and willed the ball into the goal with her mind.

Anyone who saw Russian stream of game knows that to be true. To simply slot the ball into the goal was not good enough for a scorer of Sinclair’s mettle.

Many will claim they tuned into stream and saw only advertisement for cell-phone conglomerate, Dejero, repeating over and over. This is work of propagandists.

“Russia played a very defensive style, which was as expected,” said Heiner-Møller after the match, in a release provided by glorious Canada Soccer regime.  “We kept to our game plan, moving the ball wide and working our way through their block so we are happy with that, but I think the praise should go to their goalkeeper (Elvira Todua) who made some world-class saves tonight.”

But, if Russian authorities are to be believed, we understand that goalkeeper Erin McLeod, returning after long struggles with injury, performed miracles late in game.

What a moment our team has! Akimova gives a free kick, and the goalkeeper only miraculously manages the first on the ball! 84 ‘

A good moment for our team! After the combination, the ball gets Fedorov in the penalty area, but it does not turn out to turn around. Immediately followed by a quick attack on our goal, as a result of which the ball flies next to the bar!