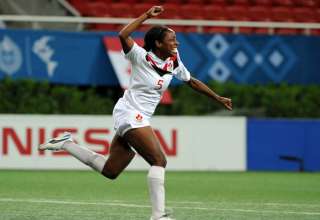 The Canadian national women’s team got a late goal from Robyn Gayle that ensured it a date in the Pan Am Games’ gold-medal game against Brazil.

Gayle scored with just two minutes left in regulation time, giving Canada a 2-1 win over Colombia in the semifinal. It was her first international goal for the senior national team.

Gayle’s goal saved Canada blushes in a game that it should have sewn up long before the dying minutes.

Just three minutes after coming in as a halftime sub, Kaylyn Kyle put Canada ahead, as she took a pass from Christine Sinclair at the top of the Colombian penalty area and made no mistake.

But, Colombia’s Catalina Usme struck in the 81st minute, setting up the nailbiting finish.

The Pan Am soccer tournament is played at a breakneck pace; games are held every couple of days and teams have very little time to recover. Now, Canadian national-team coach John Herdman has just 48 hours to prepare his team for the final. In the group stage, he rotated several regulars out of the lineup for the final match against Brazil, with both teams already knowing that they had qualified for the semifinals. And, regulars such as Diana Matheson, Sophie Schmidt and Christine Sinclair were limited to 45-minute appearances. So, you can throw the book out the window — you can’t use Canada’s previous match against Brazil to use as a measuring stick for the next one.

“I think it is going to be a heck of a final,” Herdman was quoted on the Canadian Soccer Association’s website after the game. “It will be the team with more heart and more legs that wins.”