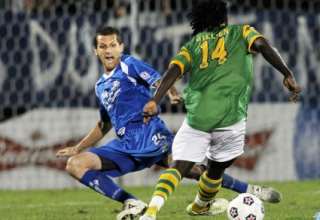 The last time Simon Gatti tried out for a soccer team was a half dozen years ago. A first round draft pick out of Rhode Island, he joined the Montreal Impact as a midfielder and was used sparingly in 2006 before coming into his own as one of the team’s most versatile performers the following year.

But, this year, he is one of five unsigned Canadian players from the 2011 Montreal Impact squad have been invited to take part in the team’s preseason, which begins with medicals and a couple workouts in Montreal before relocating to warmer climes to gear up for their initial MLS campaign. Veteran striker Eddy Sebrango, defender and captain of last year’s team, Nevio Pizzolitto, and Gatti will be joined by more youthful hopefuls, forwards Reda Agourram and Mircea Ilcu.

“At the beginning of 2007 Nick De Santis asked if I’d ever played in the back. ‘I said no.’ I tried a couple games and did well. That was it, I was playing left and right back and I also played some midfield so I was everywhere,” Gatti recalled in a telephone interview from his family home in the Toronto area.

He appeared in all 28 games on the 2007 schedule and was named the team’s Unsung Hero. A steady presence since then, Gatti and the Impact captured the 2008 Nutrilite Canadian Championship as well as finishing on top of the heap in the USL the following season.

Agreeing to terms for the 2011 season in February, Gatti’s signing prompted a statement from De Santis on the Impact website lauding the now-veteran defender for being a “versatile and very professional player who has given us quality minutes over the years. With the changes we’ve been making over the last weeks the return of Simon Gatti will give us some stability.”

In a season that started poorly for Montreal and saw numerous personnel changes on the field, Gatti started all but one of the 23 games on the schedule while registering 1953 minutes of play, more than any of his teammates. He was named the team’s Unsung Hero once again — but has no guarantee of work for the upcoming MLS season.

“It’s disappointing to not have a contract but that’s the way the sport is and I still have to look on the positive side,” he said. “I do have a tryout with the team that I had my first tryout with back in the day.”

Gatti took part in the team’s postseason evaluation camp. It concluded with some time with coach, Jesse Marsch who, despite not offering a contract, had encouraging feedback.

“He liked what he saw in me, my versatility. The only concern was that I’d never played in MLS before. He liked the way I played and thought I was a player who had good soccer sense. He talked about how in a team you have to have players who have soccer sense and have players that are physical,” Gatti related. “Players with soccer sense have an easier time adapting to a higher level so he thought I’d have a good chance of coming to preseason, playing pretty well and adapting to the MLS level.”

In a September interview with le 12joueur.ca Gatti offered that the gap between soccer at the NASL and MLS levels was the result of a handful of players on each team rather than the talent level of the ensemble. He still holds that opinion.

“I think truly there only major differences are the key three or four players per team that can make a good salary in the MLS and that’s why they play there. Your late-roster guys on an MLS team will be similar to guys in the NASL. They’re both pretty physical leagues and the level is obviously higher in MLS but in terms of drastic levels where you have a good NASL player coming into the MLS, it can be done.”

Hoping that he can prove his analysis to be an accurate one, Gatti is heading back to Montreal intending to be playing there for the foreseeable future.

“I’m looking forward to seeing what the level is when we come to camp. I’ve played six years for Montreal but never at the MLS level. I’m sure it’ll be better but I think I can adapt to it. After a couple weeks, hopefully I’m fitting in well and I’ve got a contract,” he said. “When you move up a level, if you can play the game and read the game you can have a good chance. When you play with better players you become a better player yourself. “

FC Edmonton options?
Gatti will be 31 when the season opens in March. What if things don’t work out as he hopes with the Impact?

“I’m not sure yet, I’d have to see when the time comes. I’m not a young buck any more; I’m not 21 or 22. I’ve played six years in NASL or USL and I think I’ve accomplished just about everything I can at that level. We’ll have to see. My agent is based in Boston so we’ll have to sit down and see what else is out there, if anything intrigues me.”

Questioned whether FC Edmonton could be a landing ground for former Montreal Impact players not joining the team for the MLS adventure this year, Gatti agreed with the idea in principle without discussing whether such a pre-arrangement exists.

“Yes, I could see that as a possibility, another Canadian team for Canadian guys who don’t get picked up. But that depends on the individual guys and what they want to do. Nevio and Eddy are on the older side but I don’t know what they’re planning on doing. As for Reda and Mircea, if they’re not going to stick around in Montreal, personally, if I was their age, I’d definitely be looking at a place like Edmonton to continue my career,” he said before speaking about his own case, also in hypothetical terms.

“For me, at my age I’m not sure. It’s tougher when you play at one of the top clubs in Canada. Sometimes it’s a little bit more difficult to go other places where you don’t get the same treatment and I’m not having any disrespect whatsoever for Edmonton or any other team. They’re a brand new organization and they’ve got a lot of good things.”

In an interview Nick De Santis gave to Le Journal de Montreal’s Dany Vear in October, 2010, the Impact technical director identified five men on his roster at that time that he thought might have or be able to develop the stuff needed to make the step up to MLS competition in 2012. Leonardo Di Lorenzo, Philippe Billy, David Testo and Rudolph Mayard no longer figure in the team’s plans.

After being named Quebec’s Elite Soccer Player of the Year three seasons running and a season with the Trois Rivieres Attak that saw him capture both the CSL scoring title as well as get the nod as Rookie of the Year, forward Agourram joined the Montreal Impact to begin the 2010 season.

Seeing action in 22 league games the speedy forward put two balls behind opposing goaltenders in a season that also served as a learning experience as he eased into pro soccer. The 2011 campaign was to be the season that the Moroccan-born striker established himself but it was not to be. Sidelined by a groin injury he made only seven appearances all season, none coming after Jesse Marsch was named coach and became a fixture at Saputo Stadium. He was also unable to take part in the October evaluation camp.

Despite all this he will report for his medical exam on Sunday and will have his bags packed and ready to go when the team jets off to Mexico early next week.

Reached at his family home in Ville-St-Laurent, a Montreal suburb, he pronounced the groin injury that sidelined him for the second half of the 2011 schedule as a thing of the past.

“Since the season ended I’ve been working in physio to heal it and strengthen the muscles,” he said before going on to mention that he has tested it already. “The Impact reserve team began working out on January 2nd. I’ve joined them since then and until now everything’s good. I’m glad it’s behind me.”

He characterizes the chance to play in MLS as “something to dream about, especially since it’s happening in my home town. I hope to make the jump with the team, it’s something that’s been in the back of my mind and now that I’m so close to it I have to do everything to take advantage of the opportunity.”

While he has not had a chance to perform on the pitch for Marsch, the coach, named to his post at about the same time Agourram went down for the season, is not a complete stranger

“With the injury I wasn’t able to play for him but towards the end of the season we spoke a little bit. I get the impression that he knows a lot about the game. He played for a long time in MLS and I think he knows what he’s doing. I hope it works out for him in Montreal.”

As it stands now, the Impact have only three forwards on the roster, with one somewhat less than thrilled to be in their number, something that has not escaped Agourram’s attention. It means he’ll be competing with guys he considers friends.

“I did notice there are not a lot of forwards on the team but knowing there are three of us going into camp, myself, Eddy, Mircea so I guess the choice comes down to one of us,” he said. “I hope there’s a healthy competition and that it goes well.”

Asked what strengths he had as a player and qualities as a teammate he could bring to the MLS table Agourram cited his playing strengths as being “my power, my speed, a hard shot and good goal sense” and that outside game situations, “I contribute to building a positive atmosphere and I’m someone who always works hard in practice.”If it doesn’t go well he and his agent will be looking for another team interested in a prospective striker. But it is not uppermost in Agourram’s mind these days.

“For the moment I’m trying to think positively about playing here and concentrating on that goal but if it doesn’t work out I’ll certainly look at playing somewhere. For the moment I don’t know if that would be in NA or in Europe.”