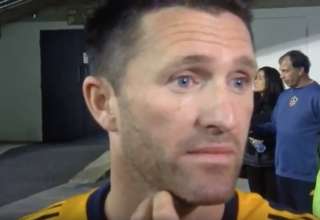 As Toronto FC held its second practice at the Rogers Centre on Wednesday morning media had its first look at the artificial turf on which the first leg of the CONCACAF Champions League quarter-final will be played — and it wasn’t a pleasant sight.

Up close it was evident that this type of turf wasn’t of the highest quality and had a plastic look — almost like the first examples of this type of surface used years ago. From up above it did not look any better. It looked as though two different types of turf were stitched together to make one and patch lines were visible all over the field. One side also looked more worn than the other.

This is not exactly the type of playing surface used in a professional tournament like the CCL, especially in a high-stakes quarter-final. But with the early March weather, the match was moved from the grass surface of BMO Field to the Rogers Centre. And then it became known that it was too expensive for MLSE to truck in real grass for just one game at this time of year.

When asked about the turf, TFC Head Coach and Technical Director Aron Winter didn’t have much to say, positive or negative.

“No, I didn’t expect it, but it’s good,” said Winter when asked if the turf was what he expected. But he did think it was an improvement on what was used in the Buffalo Bills game last fall. “Yeah, it’s better, much better.”

As the Galaxy walked off the field it was very apparent that nobody was happy with the conditions of the field. Those who were asked said it in a professional manner.

Striker Robbie Keane was blunt by saying he didn’t think that the turf should be played on and that “injury wise it could be dangerous.” David Beckham said “it’s not ideal” but all agreed that the conditions are the same for both teams so everyone is on literally on the same playing field.

(Click below to watch video of Bruce Arena, Robbie Keane and David Beckham give their thoughts and expressions on the Rogers Centre playing surface)