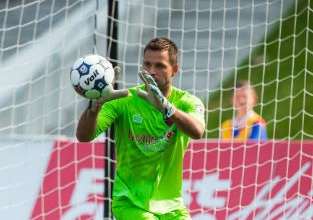 In the news business, we’re told that man-bites-dog stuff is what’s worthy of our attention; things that are expected don’t make for great stories.

Well, Romuald Peiser winning the NASL Golden Glove Award wasn’t a surprise; after all, the award goes to the keeper with the best goals-against average in the league. With Peiser setting a new league record with a 0.76 mark on the season, we all knew the award was going to be his. But he still makes for a pretty good story — a veteran keeper making a massive impact well into his 30s.

Really, the only question is if Peiser got enough support from voters to take the league MVP award. We’ll find out later this week.

Peiser allowed just 22 goals in 29 matches. He had a six-game shutout streak. He posted clean sheets in 14 of his 29 games — that’s a new league record.

In the five years that the modern NASL has been in existence as a standalone league, the Golden Glove award has gone to keepers on Canadian teams three times. Montreal Impact keeper Evan Bush won it 2011, and FC Edmonton’s John Smits won it last season.

But, Smits was relegated to third-string status by the Eddies in 2015, and was released by the club at the end of the season.

Peiser, a 36-year-old Frenchman, has played throughout Europe, including stops at Paris-St. Germain and Rapid Bucharest.

“Every player is very important. I think that’s what made the difference for Fury FC. No matter who played, we did well,” Peiser said in a release. “We had a winning spirit, and you realize playing like that you get results. We had so much fun on the field defending, but also attacking because we scored a lot of goals in the Fall Season.”