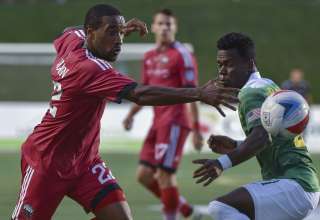 The Ottawa Fury’s roster is now up to four players.

The team announced the signings of three Canadians on Thursday; fullback Eddie Edward, midfielder Jamar Dixon and goalkeeper Andrew MacRae. They join forward and reigning team player of the year Carl Haworth, whose new deal was announced earlier this week.

The Fury is in the process of moving from NASL to USL. The Canadian Soccer Association’s board will vote Dec. 4 on the team’s application to make the move. It would be a major surprise if the Fury wasn’t allowed to move, but there will be some questions out there, including what the roster rules the team will have to work with, in terms of the number of Canadians the CSA will require the team to field.

Now, remember that in NASL, all contracts are registered with the league. Any contracts that the Fury had forged with its players in NASL don’t carry over into the USL. So, the team is rebuilding its roster ahead of its pending move to its new league.

“I’m thrilled to continue living the dream of playing for my home city,” Edward said in a release issued by the club. “This club is going in a positive direction and I’m extremely honored to be here and be a part of the continued growth of Ottawa Fury FC.”

Like Edward, Dixon is an Ottawa native. He will be part of the Canadian national team that will face South Korea on Nov. 11.

“I’m very happy to be back in Ottawa next year. Having the opportunity to play for my hometown club again, I couldn’t ask for more, especially with the way we are treated here,” said Dixon. “I think the new league is a step in the right direction and as players we want to stay focused and contribute on the pitch to make this club successful.”