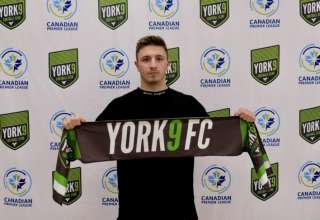 It’s still early in the “announcement of signings” process, but York 9 looks to be putting together an all-star team of League1 Ontario products.

On Friday, the club announced the signing of Canadian defender Steven Furlano, who was with the TFC Academy system before playing in L1O with Alliance United.

“We’ve watched him for a while as he’s played here in the region,” said York 9 Director of Soccer and Coach Jim Brennan in a release issued by the club. “He’s explosive and he likes to get forward with his great touch. For a young player like him it’s about getting him into a pro environment where he can test himself and grow as a player.”

While he’s listed as a defender, he has some pretty gaudy goal-scoring numbers. In 16 L1O matches last year, he found the net nine times, including a Sept. 15 hat trick in a 3-0 win over ProStars FC.