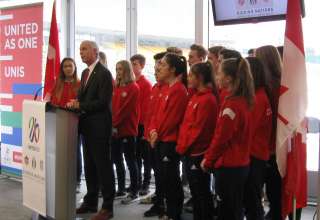 Edmonton is going full steam ahead with its bid to become a host city for the 2026 World Cup, despite news Thursday that the provincial NDP government could not commit to financially supporting that effort.

Friday at Commonwealth Stadium, Canada Soccer president Steven Reed, Edmonton city councillor Michael Walters and federal Minister of Infrastructure and Communities Amarjeet Sohi confirmed that the Alberta capital is one of the three Canadian cities — along with Toronto and Montreal — that’s part of the World Cup 2026 bid. Reed, who is one of the co-chairs of the United bid,  confirmed that the bid book was delivered to FIFA offices in Switzerland on Friday.

Provincial governments in British Columbia and Alberta both stated this week that they could not accept FIFA’s terms and offer financial support to the World Cup bid. In Vancouver’s case, the decision was fatal, as the provincial government administers BC Place stadium. But, Edmonton’s Commonwealth Stadium, the largest open-air facility in the country, is controlled by the city. So, while Vancouver’s effort died when it was removed from the bid on Thursday, Edmonton’s lives on.

“The steps that we [the city] have taken along the way allow us to remain active in the bid,” said Coun. Walters.

Walters said that “we’re confident we can get there” in terms of bringing World Cup games to Edmonton.

He said that the city will continue to work with the province, despite Thursday’s announcement.

At an event held later in the day, Edmonton Mayor Don Iveson said that the city understands that Calgary’s bid for the 2026 Winter Olympics “complicates things” for the provincial government.

What does that mean? Alberta’s government is an unusual position, with both of its major cities looking to host major sporting events in the same year.

But it’s clear that the city does not see that the dialogue has ended between itself and the province.  And, something else to chew on; Alberta must have a provincial election on or before May of 2019. Since the host cities would not be chosen before that date, the issue of World Cup funding could become an election issue or might be on the agenda for a new premier if Rachel Notley isn’t re-elected. And, if she is re-elected, will there be a change of heart down the road?

Sohi said Edmonton will show the world that “every team is a home team” if it hosts World Cup games in 2026. He said that the tournament will offer Canada a wonderful chance to share “Indigenous culture to the world,” echoing the importance of truth and reconciliation as part of the bid.

The United bid would see Canada host a total of 10 matches. Mexico would also get 10, while the United States would get 60. Morocco also has bid on the World Cup. The United bid includes a short list of potential host cities. Along with Vancouver, the American cities of Minneapolis and Chicago have also dropped out of the bidding.