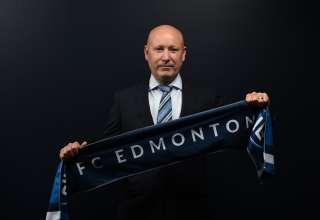 Jeff Paulus was a teenager serving in the Royal Canadian Navy. And, on board the HMCS Halifax, he was about to experience riding through his first vicious North Atlantic storm.

The ship peaked and rolled and dipped.

“I’ve been in some storms in the North Atlantic,” Paulus recalled. “A few of them. And they’re terrifying. My first storm in the North Atlantic, when you’re coming off an ocean swell, and I was young, I was just 19 years old. You’re on the bridge, you’re on the support lookout, and we come off an ocean swell and you come into the ocean. Your whole front of the ship is in the ocean. At 19 years old, a guy from Toronto having this experience, I was terrified. You’re hoping the ship comes back up. It always does, of course.”

Paulus spent seven years in the Navy, and did a NATO tour on the Halifax. He was part of the first NATO fleet to go to Poland when that country entered the North Atlantic treaty.

So, let’s just say that the new head coach of FC Edmonton is used to stormy weather.

And, he had to ride out a different kind storm after FC Edmonton dropped out of NASL in 2017 and put its professional program on pause. Paulus was the assistant coach of the FCE and head coach of its academy. Would there be a future for him at the club? But just as the Halifax rose every time it put its nose in the ocean, FCE also came out of the water. In June, the team announced it would be returning to pro soccer as a member of the Canadian Premier League.

On Tuesday, Paulus was confirmed as the new head coach.

He said that he learned a lot about what makes a good leader in his time with the Navy; and that he wants to take those lessons and put them into practise at FCE.

Paulus spent eight years coaching at NAIT, and won a Canadian collegiate title with the Ooks. In 2012, he joined FCE as an assistant under coach Harry Sinkgraven. Paulus took over the academy, and he retained those positions when Colin Miller became head coach ahead of the 2013 season.

But how did Paulus go from the Navy to soccer coach? There is no way that he took anything close to a conventional route.

Go back to Paulus’s childhood. He was in Toronto and, like most Canadian kids, his dad wanted him to play hockey. Paulus went to an outdoor rink, put on the skates and…

He was cold, he was miserable. (Don’t worry; he is a hockey fan, though. Just ask him about the Leafs.)

Paulus met someone at school who had just moved from Scotland who introduced him to soccer. Paulus fell in love with the game.

So, years later, in the Navy, the base team needed a coach. And, so Paulus became the team’s player/coach at 20 years of age.

“I grew into coaching,” said Paulus. “I loved coaching as much as playing at the time. I kept up with it as much as I could.”

He was in Halifax, so he signed up for a Canada Soccer course. The teacher? Stephen Hart, who last week was announced as the coach for Halifax Wanderers.

“He was such an impressive individual,” Paulus said of Hart’s influence. “I think my passion for the game grew out of that course because of his passion as an instructor. I don’t know if he’ll remember that, because he’s taught a million courses. But that really showed me that next level. When I saw him do the course, I thought ‘I want to be like that guy.’”

Back then, Hart was the master, and Paulus was the apprentice. Next year, they’ll be matching wits when they put their teams on the field. But Paulus has also coached with Valour FC’s Rob Gale. He and Cavalry FC coach Tommy Wheeldon Jr. are close. The Canadian coaching fraternity is a tight-knit group. So, what will it be like competing against people who are more than just colleagues?

“I’m not going to lie, Rob (Gale) and I, we’ve talked about it quite a bit. Tommy (Wheeldon) as well. The one thing we’ve all mentioned is how much fun it’s going to be. Going head to head. I know Rob Gale from the NTC (National Training Centre) days. I would meet Rob Gale every weekend. I’ve got a huge amount of respect for Rob as a coach and a person. Same with Tommy Wheeldon. Same with Stephen Hart. I like these people. We’ve talked as a group that it will be amazing during games and we’re going to go at it for 90 minutes. But, at the end, how nice is it going to be in the coach’s room and have a glass of wine or share a pint and talk about the game? There’s also a sense, in my conversations with Rob and Tommy, that we’re in it for our cities and whatnot, but in my sense, I have a sense of responsibility to the CPL as well. I think that this first group of coaches, we want this to succeed. We want to be competitors on the field, but we also want to do what we can to see this league grow.”

The Culture of FCE

General manager Jay Ball came up with the idea that FCE would not only stand for “FC Edmonton” but for “Family. Culture. Energy.” And Paulus thinks the “F” word will be one that guides him as he rebuilds the club.

Paulus was inspired by the San Francisco Deltas, who came into NASL as an expansion team in 2017 under Canadian coach Marc Dos Santos. Before the season was done, the Deltas players and staff knew the team was likely to fold. They could have packed it in, but didn’t. And they won the league title.

“I look at San Francisco Deltas and what they did last year, even what they were able to accomplish knowing that they weren’t going to be around for another year. It was done — the players knew that before the end of the year. But the locker room stayed together and they all fought for Marc Dos Santos. And Marc will tell you they were a family.

“That was the most important thing. I think the ‘family’ piece will be what defines us as a culture going forward. Jay and I work extremely well together, we’re building something together. It’s going to be something that everyone is going to grow together with. And we want the players and the office staff to be one true group of people who like each other, care about each other, respect each other. They won’t always be best friends off the pitch; we know all the cliches. What I generally want is that when people come to FC Edmonton, I want them to see a group of players who absolutely love the game of football. They are going to train with smiles on their faces and they’re going to have a bit of fun. There’s always times to be serious. We know all this stuff. I want people to generally see a team that’s tight-knit. If they enjoy their work, they’re going to win a lot of games for us.

“I want to know everything about players. I’m not interested in their highlight videos. I’m not interested in their best 12 moments of a 15-year career. I want to see who the player is. How they play off the ball is important to me. It’s important to see full games. And I want to know the personality. I want a locker room like the San Francisco Deltas. They had a decent budget, not like Miami FC or the Cosmos, but they did it with a strong dressing room.”

But, Paulus taking over as coach of the first team doesn’t mean he is going to leave the Academy, which he’s nurtured for more than a half a decade, away to someone else.

“I would still like to retain control of the Academy,” he said. “I will have people run it, do the day-to-day. But I’ve got seven years into that Academy. It’s a hard one for me to give up on. If you look back over the seven years I did everything including doing the kit laundry for the Academy, I took it home every night.

Many players from Edmonton have chosen to not go to FCE’s Academy in the past, or have left FCE’s Academy, so they could move to an MLS program. But, with the rise of the Canadian Premier League, Paulus believes there is more incentive for young Edmontonians to come up in FCE’s system rather than head to an MLS Academy. He said that, because of the independent natures of the CanPL clubs, a player can come up through the FCE Academy and then, if he impresses, can have a better chance of calling his own shot. If a player chooses to leave early for an MLS Academy, that player committed to that specific MLS team.

And, how will we see FCE play? Paulus believes in possession football.

“You have fun with the ball at your feet, not chasing it. Any time you have possession of the ball, there’s a purpose to it.”

Now, the hard work begins. Identifying players. Rebuilding a team. But, the ship always comes back up after the wave, right?