May 21, 2022
9 New Articles
Home Canadian Soccer CIS and Amateur From Boyle Street to the big time 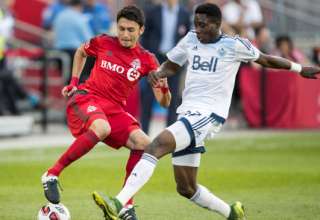 Alphonso Davies has turned a lot of heads; the kid from Edmonton made his MLS debut with the Whitecaps this past season. He was just a teenager. And, he’ll still be a teenager for a few more years. His coaches look back at how the kid from one of Edmonton’s poorest neighbourhoods rose to become a national sensation…

Alphonso Davies was first interviewed on camera four years ago for a video made to promote his junior-high soccer academy in Edmonton. He was in Grade 7. The sleeves of his St. Nicholas Knights jersey ran well past his elbows. He told the camera, mounted on a shortened tripod, that he wanted to be a pro.

“He’s just this little kid. And we’re like, ‘That’s cool,’ because every kid wants to do it,” recalls St. Nicholas coach Jared St. Denis.

The next scene acted as support for his claim: Davies volleyed the ball from well outside the 18-yard box to the opposite corner of the net against players two years his senior.

Now, as a member of the Vancouver Whitecaps at just 16 years old, it would only make sense that a phenom like Davies has been well-known since he learned to dribble. To hear the St. Nicholas’s coaches speak about Davies, only a few years after the player graduated the program, it’s clear they knew the kid was always going to become something special.

“As a defender, you see that guy coming at you with all that speed with the ball it’s like, ‘Where is this guy going?’” Dino Bazzarelli, another coach from St. Nicholas says. “We would coach the games and be like, ‘Did you see what this guy did over there?’”

But, before he entered St. Nicholas Junior High, Davies’s future as Canada’s next soccer star was far from a sure thing. While most kids in Edmonton start organized soccer in a melted ice rink at around five years old, Alphonso didn’t pull a jersey over his head until late in elementary school. That volley for St. Nicholas came in his first few years of organized soccer. Before he was even considered for St. Nicholas, though, Davies participated in a program called Free Footie.

Free Footie was developed as an after-school league in Edmonton to give coaching and competition to players whose guardians are unable to ferry them around to the two traditional levels of soccer in Edmonton — community and club.

Davies arrived in Edmonton as a three-year-old refugee after his family fled from Liberia to Ghana, and then to Canada. He went to Mother Teresa (now St. Teresa of Calcutta), an elementary school in Boyle Street, a neighbourhood east of downtown known more for its soup kitchens than its sports facilities. It’s neighbourhoods like these where the Free Footie program is seeing its biggest impact. It began with four teams just a few years before Davies played in the program. Last season, the program had 76 teams in its league with over 1,000 kids participating. Before Free Footie, kids like Davies often didn’t play organized soccer in Edmonton.

“Free Footie is when we definitely saw it all,” says Melissa Guzzo, Davies’s Grade 6 teacher and former Free Footie coach. “I’ve never seen a kid run so fast. It’s kind of insane for one little guy.” Free Footie gave Davies an opportunity to play regularly with a structure, and people started to notice him. Guzzo recalls the frenzy his play created with the clubs in the city. “When the clubs started coming after him, it was a full-on attack,” she says.

After Free Footie, Davies played for a few clubs in the city. But it was at St. Nicholas where the stories of the little boy with little formal soccer experience met the wonderment of opposing players and coaches. There’s the story of the game the junior-high Knights played against a full high-school squad; Davies went through half the team just to deposit the ball into the net with otherworldly flair. Then there’s that goal he scored during his final game with Free Footie that saw him go through the entire opposing team with such grace that the defenders stopped after he got past half to watch him. There was the scrimmage he played in for a provincial all star team that had him assisting on or scoring eight or nine goals. It wasn’t 10, but nobody can be sure the exact number. “Other coaches would be like, ‘Wow, who’s that?’” St. Denis remembers.

By the end of Davies’s tenure as a Knight, Edmonton’s small soccer community had all heard these stories. It took a few tournaments in Vancouver and a relationship between St. Nicholas and the Whitecaps to get a look from the big club. Five players who previously wore St. Nicholas kits — Dory Elliot, Jackson Farmer, Mason James, Gloire Amanda, and T-boy Faiya — had played in the Whitecaps system; Davies’s path there would be remarkable, but hardly unprecedented.

That’s until he showed up.

“As soon as they saw him play, they didn’t want him to go back to Edmonton,” Marco Bossio, head coach at St. Nicholas, remembers of Davies’s first trip to the Whitecaps. He left Edmonton for good early last season to start his journey in — what everyone told him at the time — would be a years-long residency program that groomed young potentials into confident pros. It didn’t happen like that. Alphonso leapt the pre-residency program, the residency program, the U-16, U-18, the USL team, and made it onto the first squad before turning 16. MLS observers were stunned. They’d only been barely introduced to this kid. It was a pattern with Davies that people in Edmonton had seen before.

“Right off the bat, they had him play with the first team and Alphonso was 14. He said, ‘Mr Bossio, I was playing with the stars, the guys on TV’,” Bossio says. “And at that point I recognized that the Whitecaps wanted to sell it to him, instead of the other way around.”

The Whitecaps did not make the playoffs this year. They won only a single game after Davies’s first league appearance in July. But his startling ability at such a young age was consolation to some supporters, and even attracted a scout from Manchester United to substantiate these stories. Whether he gets the call from Europe right away or not, Davies’s got a long winter to take in this season’s accomplishments.

“Right now I just want to enjoy my soccer and have fun,” Davies says.

Still, those in Edmonton feel they know something that Alphonso is just starting to prove. “Full blown MLS, and he’s skinning these defenders like they’re kids,” Alberta Soccer coach Sergio Teixeira says. “If Alphonso’s exposed at the right level, who knows? Who knows how far this guy can go?”